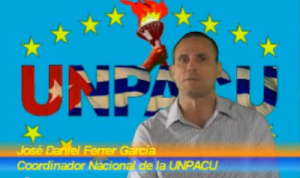 Santiago de Cuba: Ongoing detentions of UNPACU activists picked up on Turquino (the highest peak in Cuba, in the Sierra Maestra mountains), including Ovidio Martin Castellanos, coordinator of the largest arm of UNPACU, the Wilmar Villar group.

Sanctuary of El Cobre: 48 Ladies in White have just taken part in Mass, where they prayed for the freedom of political prisoners and respect for human rights. Two Ladies in White accompanied the UNPACU activists who tried to climb Turquino.

On the 118th anniversary of the “Battle Cry of Baire” campaign, there is a New Cry For Freedom in the Citizen Demand for Another Cuba. Today UNPACU honors the heroes of the struggle for independence and the Brothers to the Rescue pilots [shot down by the Cuban Air Force on 24 February 1996].

Palma Soriano: Three UNPACU activists arrested while undertaking activities in tribute to the Brothers to the Rescue pilots, as well as others in La Ceiba.

There will be later updates if there is new information about activities and repression against peaceful opponents.