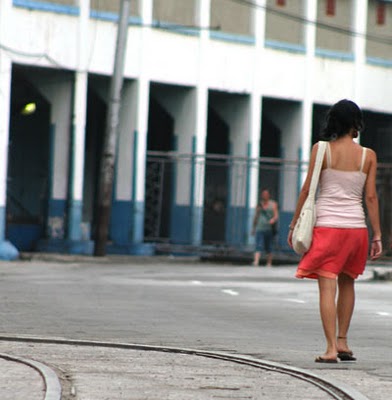 Her name is E. She’s twenty years old. She’s alive. She’s crazy. She’s desperate to do things, including, of course, the limitless freedom of her body. She’s sad. She’s very alone. She’s content in Cuba, at the reach of my hands and my writing. At the margin of everything, myself included. It’s impossible to not fall madly in love with such a little creature. E, exclusive vowel.

So thin. So angular. So dyed of an ancestral black. So scanty. A memorandum of death. So much desire compressed in a pair of decades. So orphaned. Such a vision when her smile at last bursts an explosion of pleasure. She smokes. Drinks. So post-Cuban, trapped in the shitty Little Havana of the thousand and one independent artistic groups that only dare to size up their own fear. Where would these lost angels hide if an explosion of hatred or perhaps a military re-concentration broke out right now in Cuba? They would commit suicide, certainly. Private beauty does not tolerate the mediocrity of the communal.

Hopefully E never gets killed. She’s at risk. She’s exposed. Museum of meows. She doesn’t stop. She gets involved. She’s expelled. They pedal over the minimal discharge of her backbone (her back is a cat’s back). She gets lost. Lunatic of the slums. She loses us. Not the faun’s labyrinth, but the nymph’s. She types formulas of circuits and impossible projects of books made with little pictures. She doesn’t sleep, accordingly. She doesn’t eat, except from other mouths. E is exceptionally spectacular.

I hope E reappears. That she resists. That she doesn’t become diluted in the familiar defect that this criminally conservative society has always been. I hope that she’s not deceived in her ingenuity of never telling lies. I hope that E lies. May she lie to us. May she manipulate us. May she mutate, but may she please survive the critical Cuba of the University during the times of Resurrection.

I hope to write more about E. All about E. Don’t envy me. Wait until I understand or extend myself better with E.