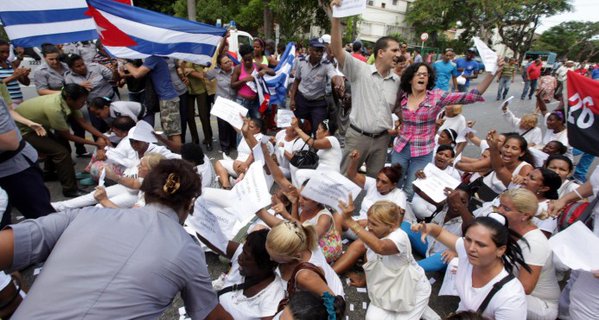 14ymedio, Havana, 23 November 2015 — During the day this Sunday nearly 300 activists were arrested across the country, according to what Cuban opposition sources told this newspaper. Most of those arrested belong to the Patriotic Union of Cuba (UNPACU) and the Ladies in White. UNPACU activist Zaqueo Báez and his wife, Lady in White Maria Acón, were released on Monday after spending more than 24 hours in custody at the Seventh Police Unit in Havana.

In Havana, over one hundred people were detained, while in the province of Santiago de Cuba the figure reached 98 activists, 51 in Camagüey, 12 in Holguin, Guantanamo 9 and 13 in Las Tunas, to which are added the arrests in other provinces, according to José Daniel Ferrer, leader of UNPACU.

In Camagüey, the police raided the home of Fernando Vázquez Guerra, coordinator of the organization in the province, and seized documents, discs and several Cuban flags belonging to UNPACU.

The opponents were detained for several hours and by Sunday night most of them had been released.