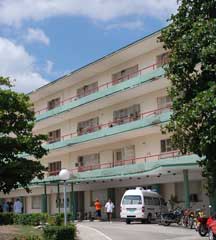 Serguei Lanza Figueroa, 33 years old, resident of Calle 28 #601, municipality of Cespedes , province of Camagey, discusses his brush with death, after being refused admission to the Manuel Azcunce Domenech Provincial Hospital of Camaguey on July 24, because it was a holiday leading up to the 26th of July. When he presented himself along with his mother Lucia Figueroa Mantilla, suffering from severe appendicitis pain that led to peritonitis, due to rupture of the appendix, he belatedly underwent surgery late on August 4 in the same hospital.