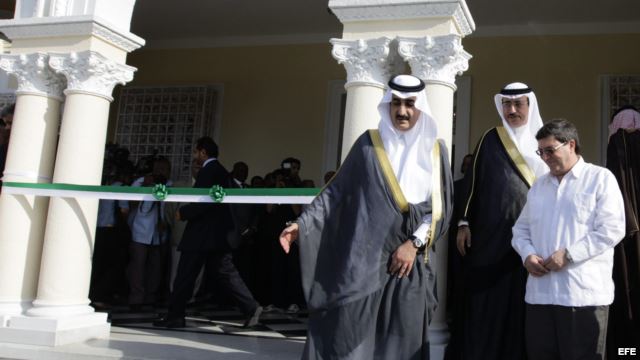 When my great grandfather was born, there was an Arab presence in Cuba.  It is impossible to exclude from national history the Lebanese Antonio Farah, who arrived on the Island in 1879 and achieved the position of city councilor in the local government of Pinar del Rio.  Likewise, there is an ample list of Syrians, Palestinians and inhabitants of the southeast zone of the Arabian peninsula in the Gulf of Persia (today the United Arab Emirates) who with the force of their bravery and talent rose to important positions in our Liberating Army.

And it is curious, because unlike many other groups of migrants, the arrival of the Arabs on the island had a very individual form, they did it in small groups that could freely choose their destiny.

All this, plus the enchanting stories depicting camels, turbans, sultans, deserts, castles with golden domes and thieves with thick eyebrows who with their sensual coffee looks made carpets fly, made the nationals offer them a Caribbean refuge.

For the current Cuban government, calculated by nature and pragmatic by necessity, Arab is synonymous with riches.  So it demonstrated a few days ago, when after carrying out a campaign last July in Qatar to attract investors, Havana paid respect and lent its newly bought fleet of Teutonic cars to a discrete group of multimillionaire Saracens who made landfall on the island in an airplane where all the unthinkable eccentricity escaped from fantasy and became reality.

A palace of luxury in the sky–that’s how the flying vessel was described by the workers of ECASA (Cuban Company of Airports and Aeronautical Services SA, the only company that operates within Cuban airports)–where an entourage of investors traveled showing off their opulence and, to flatter their vanity and by orders of the General, received special attention.  Explainable, power is a venom that carries the challenge of losing a lot to gain everything.

All options were made possible in an attempt to curry favor with a heap of petrodollars who seemed disposed to buy the world.  And the Cuban civil servants, determined to end their old autobiography of failures, during the negotiation avoided the debate of sovereignty and the familiar old tensions that constantly stimulate pyrotechnic politics between Cuba and the United States.

They saw the mine and they offered to let the visitors drill in favorable conditions in strategic sectors of the national economy; participate in the development of the metallurgic industry, invest in tourism, agriculture, medicine, education, and the financial system and banks of the nation; in the generation, transmission and supplying of energy; in transportation, in construction, in buying or running luxury hotel chains, exuberant marinas or even to make the island one enormous brothel.

I still haven’t discovered the reason behind so much genuflection; I only know that after the two full days of exhausting meetings described as “The thousand and one nights,” the Arabs decided to make it clear that they didn’t want to invest but simply to buy.  They paid in advanced an exaggerated sum, even though in reality not so fair, to acquire exclusive rights to the production of Cuban marble for a period of time.  Shortly after they said goodbye with a cold handshake and a smile, bland and insipid as a piece of bread without salt; an admirable form of saying, “Don’t even dream about it, Havana is no Beverly Hills.”