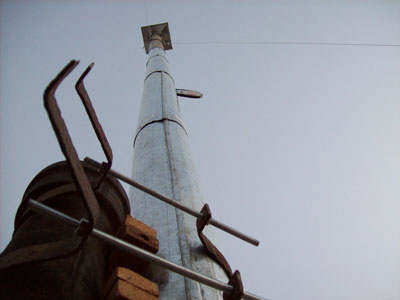 When it seems to me that mediocrity will win the battle in our little country, there are things that make my day. Last week I passed by a privately-run cafe across from the Surgical Hospital on 26 Avenue and saw that they sell Purita brand dried rosemary, oregano, basil and celery. I asked for garlic, which I knew, the employee told me they always ran out early. I bought a package of celery and with this residual aroma delighting me, Saturday I went to where they process spices.

In San Mariano between Párraga and Poey, in Vibora, the unusual fireplace and the garish colors of the house serve as unambiguous reference. I had been once, but I couldn’t see the young entrepreneurs. This time I got lucky. Boris Albrecht Zaldivar, a 26-year-old mechanical engineer, is one of the parents of this creature and the licensee of the light foods processor-seller.

Boris tells me the conversation with Carlitos (Carlos Fdez-Aballí Altamirano), from which arose the idea of what today can be considered a successful business despite being still in the red. Without knowing about garlic, or dehydration, with no feasibility or market study, they decided, and then experimented.

A combination of financial need and talent led to feverish experiments and from these came the design of the machines that carried a friend with a workshop. They were ugly, but functional. These engineers also took into account the energy consumption and pollution. Along the way they learned that they intended to start up business is considered “scientifically” not profitable for poor performance, a difficulty that in practice they have overcome. They made their feasibility and market studies, and of course, there was nothing in that niche. Spices in Cuba are overwhelmingly imported.

Producing it is one thing, selling it is another. Because their products are quality, they were able to contract with hotels, sell retail is in places like this cafe I mentioned at the beginning, but the main places are the farmers markets, and, why not, the hard currency stores.

With Carlos and Boris’s experience of having a cooperative in Spain for the construction of housing modules from a core (wrecked by remoteness of the managers), Purita, with Alexander and Fidel as wholesale and retail sellers respectively, Erlin of operations, along with Boris and Carlos, now can become one of national cooperatives within the Ministry of the Food Industry. With this they can expect to receive bank loans, rent an industrial space and expand production. Boris thinks big, not in terms of numbers, but with the pragmatism of his scientific and technical intelligence.

As we said goodbye he surprised me: he knows my name (I hadn’t mentioned it), knows my blog, and said to me, a little sarcastically, “You’re an independent journalist.” I explained that writing a blog doesn’t pay anyone, and we would have started another long and rich conversation but for the threat of a huge downpour. This post is a good excuse to pick up where we left off.