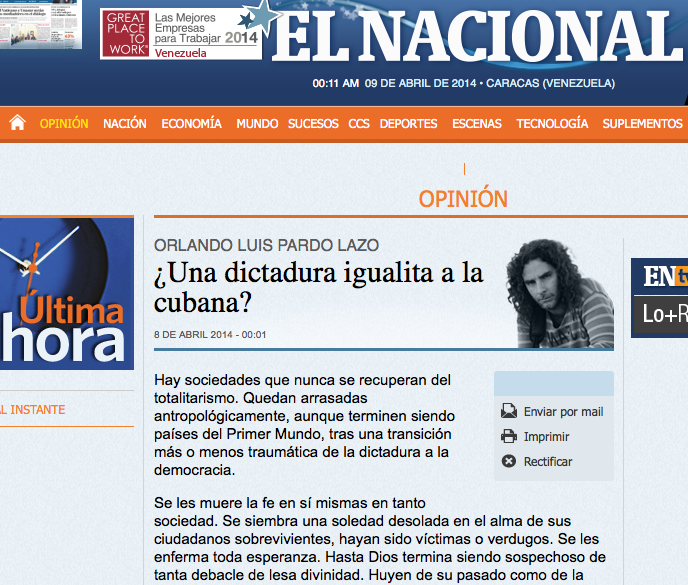 There are countries that never recover from totalitarianism. They remain anthropologically backward, even though, after a more or less traumatic transition from dictatorship to democracy they end up being First World countries.

Faith in themselves and in society dies. A desolate loneliness is sown in the souls of the surviving citizens, whether they were victims or executioners. All hope is hopeless. Even God ends up suspected of a debacle against divinity. They flee their past like the plague. The word never regains its shine of a human thing and is devalued, like a bridge permanently in danger of collapse. They cease to be a society to become something far more sinister and silent. This is the transcendent triumph of totalitarians: once installed, they are irreversible in perpetuity.

This happened in my country, Cuba, although almost no Cuban is capable of recognizing it, perhaps to avoid his share of the blame.

This is happening in your country now, Venezuela, and half the world seems to accept it with a criminal complicity.

When the machinery of the State is the deliverer of a Dogma that must be imposed at any price, be it Mohammed or Marx, when the government hijacks the balances that resolve and evolve within a modern society, when the individual is worth less than an amorphous mass, when a whole life turns into a vaudeville theater where the intelligence apparatus is manipulating its script with puppets and deaths, then the damage to civilization ends up being constitutional. Genetic. Generation after generation. The human being is annihilated with a bullet to the head, or condemned to decades in prison, or to permanent exile.

Paternalistic despotism is that simple, half slanderous and half childish, in its radical simplicity. Like a boy who, in cold blood, opens the entrails of a worm or a lizard that he trapped in the garden. Fascist childhood, Eden of all extremisms—and exterminations.

Whoever tires (of killing), loses. That is the limitless logic of the State gangs, be they Muslims or Marxists.

And that happened in my country, Cuba, which in a few months paid with thousands of deaths—and with an exile in the millions—for the barbaric beauty of a Revolution that was applauded throughout Latin America.

And that is happening in your country now, Venezuela, which unfortunately applauded the Fidelist feast of the anonymous dead of Cuba, those who half a century back died in the mountains or on the scaffold, also for you, trying—even with the assassination of the commander in chief—to spare you this massacre that today continues to excite the wicked international Left.