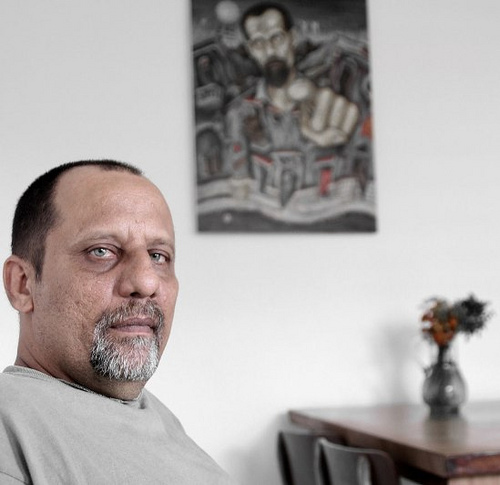 Why is everyone so sad here? I promise to ask the poet, while at the Hanoi playground in an unnumbered area of Alamar: a once breathing tribute to the great defeat of Yankee imperialism in Asia, today bleak without benches but not without sweating drunks, shouting while they play chess or kiss mouth to toothless mouth.

Half a block from Hanoi in ruins, in front of a school covered with Elpidio Valdes graffiti, with the soiled protection of a ladder up the fourth floor on the level with Alamar, the man himself opens the doors of his hermitage apartment. Juan Carlos Flores: Why is your poetry such a sad stone?

He laughed. In shabby denim shorts and an olive-green sweater. Barefoot. With crazed blue eyes directly overflowing the aphasic aura of your brain.

It’s a Saturday in the country. We both know very well that we agree here. We will pose for you. Spontaneity is a scam bigger than Cubanness. We are going to violate the global audience a little, to charge your account for this uncivil plateau that daily makes us yawn because all around there is never anyone to pursue the dialogue.

I tell him that I came twittering in the 20 Cuban peso almendrón taxi. I proposed in my account @OLPL a kind of virtual interview with him. But the only question that comes to my mobile by SMS is pure democratic desperation from Gabriel.toj: “Who will win the next elections in Cuba?” As if a less futile future were possible in Cuba. As if it were possible to earn it by dint of asking Juan Carlos Flores for it.

And right there we break the ice. For Fidel. For a geopolitical Cuban poetry, forgive the oxymoron. And, of course, for the Revolution.

Juan Carlos Flores slips between the anniversaries that “crush” any “joy,” between the traumas that any opposition makes of the clinical option. It feels like a sanatorium, tabula rasa, where even the language st-st-stutters to testify. And yet, he is alive, “A victim more than an author.” And convinced that before him no one has found a poetic form that is itself Revolution: no one has alchemically eaten the despotic ideologues of the Revolution: digestion, defecation, traces on the toilet paper or gazette.

He’s confident that no other Cuban could sustain this long, reiterative, nightmarish monologue with Fidel. Because only a very minor poet can resist in this way the Maximum Leaders, “from egomaniac to egomaniac.” Can be, in fact, the texturized meat of power and create his own readers including even those political police agents “assigned” to him. And it’s that the big local poets put a system in place to theorize systems instead of applying entomology: they take up the idyllic telescope of the dais which doesn’t let them focus through the microscope on the domestic details of the horror.

On TV, the deferred goal of Lithuania against Spain in a league not as backward as one would suspect. Juan Carlos Flores played football in reality as well is in his mirrored paragraphs or “barbecue.” Also baseball (Jose Ibar has read the poem where he mentions it). His Utopia is not based on having a Delphic library, but a little museum of sports autographs (he had that of the “Alamar Curveballer” but it was misplaced with the Industriales pitcher went into exile). He doesn’t aspire to a Nobel Prize that doesn’t include a photo of him outside Yankee Stadium (the panic of the crowds chases him beyond the idea of freedom), perhaps with the blue cap of the Lions of the Capital (the only National Series team that already inhabits a professional future). What were we talking about when we talk about poetry? Certainly not the national past-time. We were talking about the United States.

The United States as an indispensable poetic influence (recently he was invited to read at several American universities and to present a Cuban body of work at the Americas Society, where we collaborated). The United States as the gastronomic tsunami that in the first tremor of the State will sweep away the austere bastion of this country not by a cannon shot but by food and trash television (already happening clandestinely). The United States as image and possibility, as will and representation, as the practice of this schizophrenic America that is a black hole in our prudish and paranoid tradition. The United States as a natural reader of Selection o Selections that is, paradoxically, the only thing in Cuba that does not reek of the past.

What would a poet announce today without intellectually resorting to dead topics from the past? Juan Carlos Flores doesn’t know it, he suffers it, as “so many here.” From his first texts from the eighties to the unpublished “El Trapiche,” through several national awards and published books (“to call them books is an exaggeration”), more electrifying performance readers and a couple of albums recorded in his voice, Juan Carlos Flores practices the residual, the dregs, the escape and at times the claustrophobic, the backlash of the apparent losers (Spain tied 1:1): for him, the invisible is not null and the zero would be perfection. A poet like Juan Carlos Flores announced that the modern poet must fall entirely into barbarism, change his career for the debacle, dehumanize himself: only thus can he be merciful without being miserable (the Cuban revolution tried but the gap is its Christ, thus the kitsch of its poetic revolutionary pamphlets.

We cut the pastry I brought as a gift. Also a malt. We’re hungry. I forgot the cigars. He smokes his own while reading me a poem on camera. I record it. His poodle Luna pisses for joy and lies down on the sofa to nap. On Saturday the country advances and with the heat we lose the desire to pose. We’re tempted to think ourselves witnesses. To people born dead in the Cuban literary magazines of the XXI Century. Disemboweled between parade and parade. Guys caught off base, miscreants who bet that “thinking is fascinating.” Exhumed at just the historic time that they touch death, reading the same little markers as if they were tombstones. Speaking of ourselves as the final way of recognizing a worker wasteland called Alamar, exiles in a “lingua vulgata” at the limit of a city on the outskirts of a country on the outskirts (geography as myth rather than metaphor).

Juan Carlos Flores, “non-existent poet scrawls a draft of an impossible poem,” horizontal resident of a dead class, human, too human, but never humanist, announces to me his ritual siesta with a “good afternoon and goodbye.” And off I go, tweeting back my enthusiasm in the face of the Cuban blogosphere, the Hanoi playground now a proletarian prolapse of our parapolice paradise.

I suddenly realized that I hadn’t take a single note. Best that way. Memory betrays us with surprises. A mistake saves us, with it’s load of the half-obscene (for others) and half angelic (for him and me). Nor did I say “thanks.”