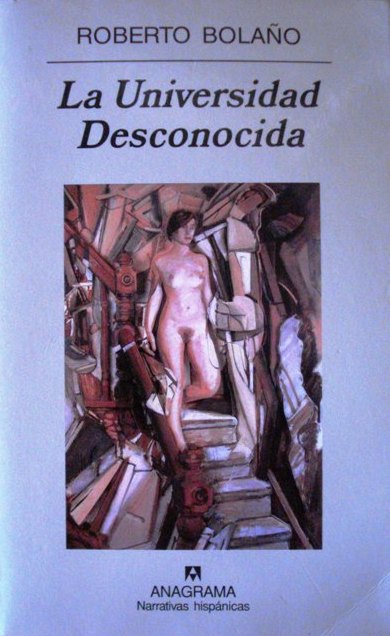 It often happens to me with good books the same thing that happens with the best dreams: when they come to me, they are here to stay.

Ernesto, a friend of a couple of friends, came from the warm city of Barcelona and brought this gift to my hands. It’s called The Unknown University, it’s the complete poetry of a complete novelist, the Chilean Roberto Bolaño, the one who surprised us all with the novel The Savage Detectives when we were just waiting for the death of a genre that deteriorated during the nineties to the point of stagnating as of late.

What happens with simple poetry is that it becomes a compass to find the right words. Bolaño’s poetry is exactly that: Ariadne’s thread in the middle of his life. The peculiarity of these almost 500 pages lies in the lack of a visible effort on the part of the author to find himself. Bolaño had a predestined route which was prose, as much in his plentiful novels (almost ten) as in his numerous short stories, and at the same time as a silent yet very visible scaffolding was erected for the seekers of novelty in new literature, he let his thoughts and the search for that other identity which is the human language, fall in poetry.

Poetry served Bolaño to cross the bridge between what is public and what is intimate. Even though some of his poems slipped into magazines and anthologies, at the end of his life, afraid it would get lost in the way, he put together, edited and corrected every page of his whole work, sometimes in prose, sometimes in the most pristine verses one could find. Here it is now, at least for us, readers from these parts of the hemisphere where books arrive several years after publication, the complete works of poetry of Roberto Bolaño, compiled in just one volume by Anagrama in 2007 and which today starts its voyage through the hands, the offices, and the benches where the readers of this island sit, to taste that unknown university that may be life or poetry