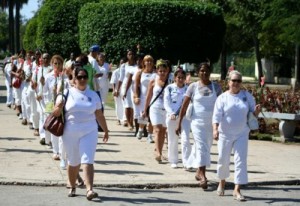 Ladies in White in one of their marches down Fifth Avenue.
Photo: Luis Orlando

I don’t want to saddle anyone with adjectives they don’t want. In general, I, for one, have always been rather hesitant to accept labels, especially when the socio-official “taxonomy” is so prodigious in itself in ambiguous definitions that it turns a political opponent into a traitor, an individual freely expressing their own ideas into a Treasury Department employee of the United States, or alternative bloggers practicing what has been called citizen journalism into “cyber-terrorists.” Everyone, without exception, is put in a large sack with the terrible label of “dissidents”, which automatically makes us “despicable mercenaries at the service of the empire”. Ordinary Cuban citizens that we come across in our daily strolls, or the very neighbors that greet us when we meet on the stairs in our building have come to incorporate into their psyche that we carry on our shoulders and faces the epithet of “dissidents”, that we are a sort of contagious plague, such as the lady with the scarlet letter, the Jews with their yellow star under Nazi Germany or the lepers forced to wear jingle bells in medieval times.

This comment I’m making is a necessary preamble. Believe it or not, a candid and sincere old couple living in my neighborhood was offended when someone warned them to be careful because I’m a dissident. They protested: “Don’t say that about her, she is a good person and hers is a very well-mannered and decent family”. These nice old people and I often run into each other at the grocer’s, the butcher’s or the farmers’ market, and they know my political opinions (which I have never hidden and they are in agreement with, by the way), but won’t allow that anyone to “insult” me with the loathsome nickname of dissident. I simply cannot be “that”.

Another example no less amusing is that of another elderly gentleman, one of my sources of information about what happens in the neighborhood, who even enlightens me with comments that hit the nail on the head. I once told that I am a citizen-journalist and that what I write can only be read on the Internet. “Ah, you’re a journalist!” I said “kind of”. “And you dare to write about the heavy things we discuss?” I answered yes and added that -as he must know- I am a dissident. “No way! You’re not with the government and criticize all the bad things, which are many, but dissidents are those who want the Americans to invade us”. I gave up: he’s over 70, and, with his low level of schooling, he would probably better understand how to manage a blog than the true concept of what a dissident is. The term has been demonized to that extreme.

Because of this, when I use the word I am always ready for a reply, even when applied to a civil disobedient like me. Some people get uptight, perhaps because they know the power of words. That is why, here and now, I ask permission of to all who disagree with the government, of political prisoners, of those who spread the truth about the Cuban dictatorship, of those struggling to promote peaceful change towards democracy in Cuba, of independent journalists, of bloggers, and all civic organizations not affiliated with the government to refer to this large set as dissidents. I assume that everyone in this diverse group has in common a clear awareness of the need for change in our country, will do and say what we think is necessary to promote those changes through peaceful means, the spirit of democracy and freedom, and the hope for a better future for all Cubans, among other principles. The risk this entails unites us in a country where a half-century long dictatorship holds absolute power and has begun to understand that its power will not last forever.

We are used to viewing the government as a clever and powerful enemy, so perhaps we may not have realized how much we have been growing in recent years. There are more Cubans raising our own voices every day inside the Island. More and more groups are facing the dictatorship. It is cracking the shell of fear, and the authorities are expected to increasingly tighten the nut and repress with ever-more rage. Though the signals of the future end of the regime are in sight already, it would be premature and hasty to mention deadlines; we have a long way to go to reach a consensus, a common destiny, but I have the impression that, for some time, dissidents have begun to abandon belligerency and, showing respect for mutual differences, we have begun to show solidarity with each other. That is a first step and a healthy sign.

I want, therefore, to publicly thank today all dissidents for the reasonable end to the hostilities. This time, the alleged “unity” is not based solely on signing a proposal every once in a while. Orlando Zapata’s death, the sacrifice of Guillermo Fariñas, and the constancy of the Ladies in White have had the power of assembly that political harangues or programs of either leader had not achieved before. Interestingly, this time, almost no one is claiming the limelight, and almost all are pushing in the same direction and with similar strength… I vote for such humility to be maintained. All indications are that the true seeds of the strength of the dissidence lay in plurality, solidarity and respect for civic differences.