14ymedio, Luz Escobar, Havana, 11 January 2018 — Jimena yawns and says she has barely slept since leaving San Juan y Martínez, in Pinar del Río province, to be on time Wednesday at the Colombian consulate in Havana. The quiet street in Havana’s Miramar neighborhood where the consulate is located has become a hive of activity this week.

Quick off the mark, the residents around the diplomatic site have not missed the opportunity to put together a network of businesses to meet the needs of the hundreds of Cubans who arrive every day. From the water sellers, the residents who charge a fee to use their bathrooms, to those who rent simple accommodations, all are doing a brisk business in this ’off-season’ of the year.

Since Washington drastically reduced its diplomatic staff in Cuba and canceled the handling of visa processing in Havana because of the alleged acoustic attacks, thousands of Cubans have been left in limbo in the middle of a process to emigrate or visit the United States.

The despair set off by the interruption in processing visas is now felt in every inch of Calle 14 between 5th and 7th in Havana’s Playa municipality, near the Colombian consulate. People are arriving from all parts of the Island, hoping to travel to the US Embassy in Bogotá, Colombia, where they must go to get their permission to enter the US.

Every face is one of anguish as they wait more than 50 yards from the consulate entrance. The police have placed an improvised set of fences and gates to keep the applicants away from the embassy entrance. The street is closed to traffic and no vehicles are allowed to park in the block.

The authorities have also deployed personnel from State Security, who, although dressed in civilian clothes, are easily identified by those waiting based on their military hairstyles and the way they constantly observe the line, which grows as the morning progresses.

“Our routine has been destroyed,” laments José, a retiree who works guarding the entrance of a prosperous house that rents rooms to tourists. “Customers can’t get here by car and when they come from the airport they have to get out of the taxi in the next block and lug their suitcases,” he laments.

The neighborhood, with several embassies and diplomatic residences, is experiencing a shock. In several places people have put down cardboard to sleep on through the night so as not to lose their place in line. “They urinate in the garden,” laments José, for whom the most difficult part is that “the police are everywhere and now you can not even buy an egg ‘under the table’.”

The line for US travel documents ordinarily formed in the park at Calzada and K, in Vedado, a place that traditionally had hosted “the line to leave,” jokes José.

Now, the sea of people has moved to this street in Miramar, where the well-oiled infrastructure of services created by local entrepreneurs around the US embassy does not yet exist. The commercial network ranged from coffee shops to places where self-employed workers charged people to fill out the forms for the visa process.

In the new location everything seems improvised and disconnected, beginning with the small number of personnel in the Colombian consulate that is trying to manage the avalanche of people, the haphazardness of the space for people arriving and waiting, and the lack of food services for those who must wait for hours, in a neighborhood where things generally cost more than they do elsewhere in Havana.

“An egg sandwich cost me 3 CUC in a private coffee shop, because almost everyone who lives in this part of the city has money, or earns it from renting [to tourists] or is a foreigner,” complains a man who says he arrived from Remedios, in Villa Clara. “If I have to stay another day here I’m going to have spent all my money,” he says.

Beside him, a woman describes the journey she made from Las Tunas and complains loudly that for the second consecutive day she has not been seen. “I have all my papers and my appointment for the US visa is scheduled for the end of the month in Bogota, but the doorman says they are only serving those who are traveling this week.”

The guard raises his arms and asks for silence. The human chorus of laments and demands is silent for a moment. The man, overwhelmed, clarifies that only requests from those with the earliest appointments in Colombia are being processed.

“You must be calm, as far as we are concerned, a great effort is being made and so far nobody has been unable to travel but it is important to organize the entrance, which can only be by date of the first summons,” says the man without managing to calm the spirits.

He then selects the group that will enter the consulate. Several policemen accompany the official and are in charge of stopping the vehicular traffic on the cross street so that people can cross to the other side. The line of the chosen ones covers the distance in silence, while those who remain outside watch them with a mixture of envy and resignation. The conversation breaks out again when the police move away.

Manuel Perdomo says he wants to see his son in Miami. He shares with the others what he knows about the procedures in Colombia. “It is necessary to take a certificate of vaccines and a summary of your clinical history to facilitate the medical check-up,” says the man, who expects to receive a US residence premit under the family reunification program.

“Anyone who is missing a vaccine is going to have to pay for it there,” he says, with his finger pointing to that distant and dreamed of place that Bogotá has become. Perdomo exchanges advice on what awaits them in Colombia because he believes they should help each other. “We are the ones affected,” he says.

This video is not subtitled, but gives a sense of the scene around the consulate

A few yards away, a neighbor on the block charges 5 Cuban pesos for access to his bathroom. “I have toilet paper, soap and a little cologne for those who want to clean up,” he promotes his service. “If someone wants to take a shower you can do that too, but that costs more,” he clarifies.

The bathroom is small and the mirror over the sink is broken. Near the sink, on some tiles that lost their shine years ago, they have stuck a sign that announces that in a nearby house “forms are filled out.” The splashes of water have blurred the phrase, but you can still read the house number and a telephone number.

The most common complaint heard alludes to the lack of information about the new procedures. Jimena is worried about having to connect to the internet to complete some form. “They told me that they will give me the printed forms here, but what if it’s not true?”

Her son has warned by a fellow resident of Pinar del Río not to pay 20 Cuban convertible pesos for the service to fill out the consular documents. “He told me that he is going to take care of everything from Miami, because I do not have the slightest idea of how to connect to a Wi-Fi hotspot,” she says.

“You can not be here, señora, you have to go to the corner and wait for the official to review the papers,” a uniformed man tells a woman. The man turns and yells at an independent journalist, telling him that photographs are not allowed. He also tells a young woman to turn off her phone before entering the room.

Little by little, part of the strict security routine that was deployed around the US Embassy is being transferred to the Colombian consulate.

Jimena’s fears do not end in Cuba. His biggest nightmare is to arrive in Bogotá and be asked for a document she does not have. The mere idea that she might have to return to the Island to look for a paper robs her of her sleep. “Just in case, I’m taking everything, even what is not necessary,” she says, and shows a pink folder cluttered with papers.

At noon, the the nearly fifty people still standing in line wilt with fatigue. The rest have gone to have lunch or doze under nearby trees. 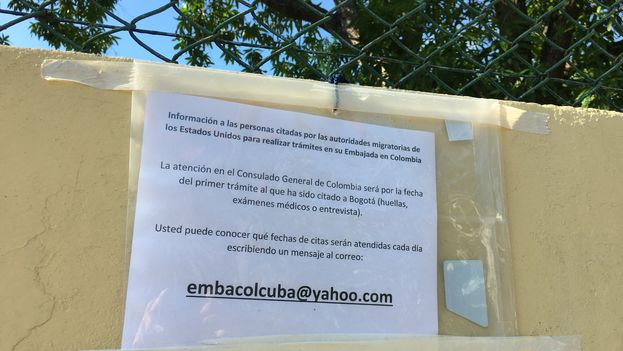 The guard, who until last December yawned in his booth overcome by  boredom, stares at the line. “Señora you can’t be here,” he warns a Cuban woman living in Miami who approaches the consulate door to try to enter. The woman complains that she has come to help her daughter obtain the Colombian visa and that everything is very badly organized.

At several points, employees have posted a sign with an email to clear up doubts and get an appointment, but most of those who arrive prefer to be “present in body.” The anguish that they have lived for weeks, since the relationship between Washington and Havana began to get complicated, is not calmed with an email.

“I’m staying here until the Colombian visa is stamped on my passport, so I have to sleep overnight in the street,” says José Carlos, a Havana resident who has been waiting for two years to reunite with his children and his wife “on the other side of the puddle.” And he adds, “Anyway, I already sold my house so I’m renting and no one is at home waiting for me.”

As evening starts to fall pessimism falls over the line. “There are no guarantees that the United States will grant us the visa,” says a female voice that comes from a corner of the group. “All this can be for nothing and a tremendous loss of money,” she adds. José Carlos silences her: “Do not be a wet blanket, when you get to Yuma you will not remember any of this.”

The guard continues to watch the group closely, while darkness settles over busy Calle 14 in Miramar.