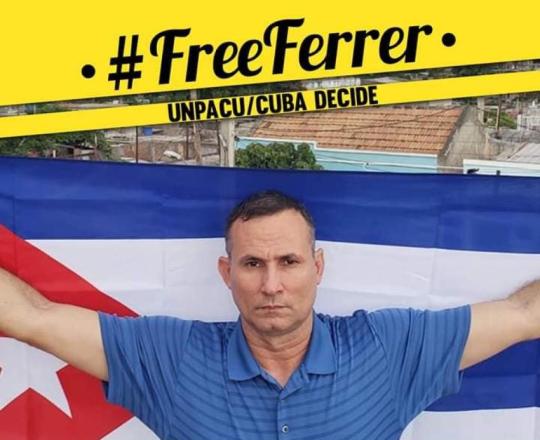 Jeovany Jimenez Vega, 8 December 2019 — The arrest of opposition leader José Daniel Ferrer, head of the Patriotic Union of Cuba (UNPACU) on October 1st, on false allegation of “kidnapping” and “beating” an individual, has plunged into a new whirlwind of criticism the Castro regime, which as usual insists the detainee will be prosecuted as a common inmate, which fits perfectly within the “continuity praxis” of the administrator in office at the Plaza of the Revolution.

The international repercussion of the case brought in condemnation from the European Parliament, which, through a resolution voted on November 28th, requested the Government of Havana to immediately release the opposition leader. Amnesty International has already pronounced in similar terms — requesting Diaz-Canel’s government to allow them attend the dissident’s  trial — along with relevant personalities, inside and outside the Cuban exile.

The Havana regime sees with great concern and greater clumsiness how these chestnuts are charred by fire, as evidenced by the disgusting report released last week — on the eve of the aforementioned European Parliament Resolution — by the National News of Cuban Television where, by means of gross manipulation, events, videos and photos taken of Ferrer, were distorted to the point it makes you sick, and a collage of tampering and false allegations to present the detainee as a vulgar criminal, natural-born angry and violent, was conclusive.

One of the moments of this botch-up shows in a very low video resolution — something very curious and inexplicable in a country that already has high-definition channels — someone with a physique very much to Ferrer’s, who at some point hits his forehead against a table several times  in front of impassive officer, as harmless and meek as a nun on Easter night. This would presumably prove, according to the script of the report, that any injury found on Ferrer’s anatomy would be self-inflicted.

Personally, I believe that, according to comments on several sites, the one who is hitting himself in the manipulated report is not Ferrer but a carefully chosen double. It is exposed by some gestures and subtle notes of his voice, both, by the way, easy to alter using current digital technology.

But even if  Ferrer was self-injured in that video, it should be taken into account the two months he has been kidnapped by his captors, suffering all kinds of threats, humiliation, extreme physical and psychological torture, and isolated in the midst of absolute helplessness, all of which, humanly speaking, would excuse this moment of self-aggression.

Note, however, that such violence is never directed at the officer who undoubtedly harasses him. For all this, even in the hypothetical case that this video shows the actual Ferrer hitting himself, it would not count against him.

That we are facing one of the many cases staged by the dictatorship, typical of its modus operandi and where it outrageously lies, was demonstrated by those who patiently investigated this vulgar fiction of hit men from the 21st.

The Cuban regime displays itself to such a discredit already, such a degree of impunity shown for more than half a century, so vulgar, so recidivist, such unscrupulous liars, that I haven’t believed a single word of theirs for a long long time.

Not even certainties as definitive as the roundness of the Earth sound like truth to me when they come from them in that news channel that now tries to lynch Ferrer.

That a national report highlighted Ferrer’s identity in details — something meticulously avoided by the authorities for six decades to deprive its opponents of visibility — only denounces a high degree of despair. Although this shot could end up shooting the dictatorship in its own foot. As things are right now, it could a double-edged sword and bring them the opposite result: instead of annihilating Ferrer, it could end up giving him an unusual importance inside the country.

But the fearlessness of the event never ceases to outrage. Personally, I will always prefer to face a tyrant rather than a cynic. At least the first, despite his mighty arrogance — or just for that very reason — has the courage to clearly present the rules of the game: “It is what it is because I said so.”

However, cynicism is topped with cowardice: it is like that guy that does not dare to show himself as the true arrogant bully that he actually is — which has nothing to do with the tyrant at all — but also insults your intelligence when expecting you to believe all that foolishness he spits in your face.

The same thing happens with the henchmen — from Cuban political police — when they wear civilian clothes in their unpunished operations so as not to expose themselves… as cowards!

It is the classical duet “Communist Party-State Security”, when it organizes the repudiation mobs and the public beatings against peaceful opponents — where a perimeter secured perimeter by local police is mandatory, “seasoned with the occasional enforcer in an official uniform, orchestrated to “humanely” protect the beaten “scum” [Fidel Castro’s favored term for dissidents] from the fury of angry people who “spontaneously” defend their revolution — as well as the same cynicism of Ferrer’s case.

The dictatorship clings once more, in its wreckage, to the same old board: everyone who dissents from the flock is nothing more than a piece of shit, a disposable lumpen, a mercenary paid by the CIA and US Government. But this old trick, — repeated over and over — is already decaying and suffers beyond repair, which is why, today, only their greatest fans swallow it.

But a lie repeated a thousand times will never be more than that, a lie a thousand times repeated, and there is a fact here that cannot be buried: José Daniel Ferrer, beyond the empathy that he generates or not inside or outside Cuba, has the undeniable merit of having developed the most extensive, active opposition organization, one that has kept a more visible, systematic and constant civic resistance against Castro dictatorship over the past two decades, and has done so against all odds, out of a civil struggle, without violent methods and showing his valor.

This is, despite the gorillas’ tantrum and their disgusting lies, a truth that regime of Havana can no longer reverse.