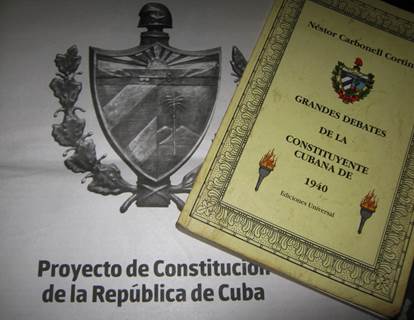 Fernando Dámaso, 7 August 2018 — The draft of the new Cuban constitution introduces some changes to the previous Stalinist constitution of 1976 in regards to economic, social, structural and organizational considerations as they pertain to the operations of the state and government. It is simply an acknowledgement of the current situation, with the Cuban communist party continuing to exercise absolute power over the republic and the constitution, whose own text defines it as the “superior guiding force of society and the state.”

At the Constituent Assembly which drafted the 1940 constitution, Dr. José Manuel Cortina, president of the Coordinating Commission, addressed tensions that arose by delivering the historic words “Political parties out; the nation in!” The current commission seems seems instead to be saying “the party in; the nation out!”

Among the striking features of the new document are the abandonment of communism as a goal and the ratification of socialism as “irrevocable,” the acceptance of dual nationality, marriage between two people regardless of gender, acceptance of various forms of private property (while favoring socialist property), limitations on property (though not on wealth that is legally obtained), and the reestablishment of the offices of President of the Republic, Vice-President and Prime Minister as well as provincial governorships and city mayors. Compared to the previous constitution this is a clearly a step forward though not as significant as Cubans would like.

In order for this constitution to be the constitution for all Cubans and not just for one political party, it must undergo some changes:

• Eliminate wording from Article 3 that mandates the irrevocability of socialism and socio-political system that has existed since the revolution. No constitution should define as irrevocable or untouchable certain articles since all are subject to change with the passage of time and under new socio-political considerations.

• Eliminate wording from Article 5 stating that the communist party “is the major guiding force of society and the state.” If the constitution is the “law of laws,” no political party can be above it, not even the so-called “sole party.” No party can put itself above the nation unless those who created it believe it to be a religion on par with Christianity, Islam or Buddhism, which would be absurd. And if, as Article 97 states, “the National Assembly of People’s Power is the supreme organ of state power,” it is contradictory that the sole political party, which represents only a minority of the Cuban people, should be the guiding force of society and the state as Article 5 states.

• Establish in Article 14 unrestricted political pluralism and legalize all manner of organizations, not just those which are organized and controlled by the state. A political party is no more than an organization in which citizens, to a greater or lesser degree, join together out of common economic, political and social interests with the goal of putting them into practice through the exercise of power achieved through free elections in which a majority of voters express their will.

• Grant in Article 21 private property the same status and rights as state property.*

Discussion and analysis by the population of the already approved constitution will be more or less democratic; the same cannot be said of its drafting.

*Translator’s note: Article 21 of the proposed new Cuban constitution identifies six forms of property ownership, including “socialist” and “private.” The former allows for very broad control of the means of production. While ownership of private property also allows for such control, it has traditionally been much more severely limited, typically to very small private businesses.