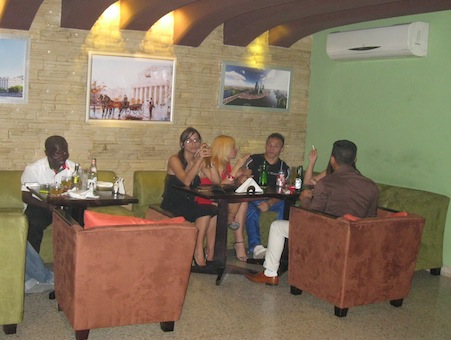 A restaurant catering to a thousand Russians. Or is it for the geriatric and diplomatic sets? Is the Cold War still with us?

HAVANA, Cuba — A few months ago there was a rumor making the rounds of the Cuban capital. A new Russian restaurant was about to open in Havana. The place, to be called “Tabarich” (or Tovarich in its English transliteration), would be located in Miramar, an enclave favored by the geriatric jet set, diplomats and others with access to hard currency.

Tabarich’s predecessor — the casino and cabaret Montmatre, which also catered to the elite — had been built during the era of the Cuban republic. After the revolution it became another restaurant, the Moscú (or Moscow), as part of a 1960s revitalization project for the Rampa, according to the  movie director Enrique Colina.

In the 1970s and 1980s the Moscú had a certain splendor. Several generations of Cubans, including Carmita, a resident of Guanabacoa, recall its “wide variety of dishes.” Margot, a resident of Lawton, remembers its “carved wood ceilings and the graciousness of its staff.” For others like Desiderio Navarro the memories are not so fond. “Moscú and my wallet were light years apart,” he says. 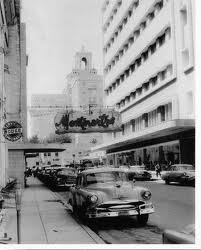 A public bath in the 1980s in what had been the Moscú restaurant, formerly the Montmartre cabaret.

A fire devastated the building in 1990, which coincided, perhaps conveniently, with the fall of the Soviet bloc. “It might have been a premeditated fire,” notes Arturo, an elderly gourmet.

The cabaret Montmartre, where French singers Edith Piaf and Maurice Chevalier once performed.

In the 1990s relations between Russia and Cuba cooled but after 2000 they took a new turn. In 2007 the National Coordinating Committee (NCC) was formed with the blessing of the Russian embassy in Havana and Cuban authorities. It was made up of  Russian women with some Cuban-Russian members. Their goal is to preserve Russian culture and the traditions of a community numbering about 1,077 Russian speakers.

The prospect of rehabilitating the old Moscú was considered and, while it was well-received — or at least seems to have been — nothing came of it.

Tabarich opened its doors in October 2013. “I was thinking about the Russian community living in Cuba and Cubans nostalgic for the Soviet era,” its manager, Pavel, tells me, adding, “It was designed with the turmoil of that historic period in mind.”

The restaurant is owned by two brothers: Anton, who lives in Russia and provides the funding, and Andrey, who remains on the island as its business manager. The Russian dishes offered are prepared by Cuban chefs who specialize in Russian food. If you would like a Russian dish such as pelmini dumplings with Smetana sauce and a glass of Cristal beer, the bill in hard-currency will put a big dent in your pocketbook!