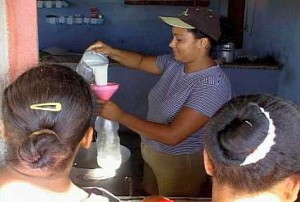 PUERTO PADRE, Cuba, October, www.cubanet.org – “Milk production is in serious trouble here,” said the first secretary of the Provincial Committee of the Communist Party in Las Tunas, Ariel Santana Santiesteban, in a meeting last month with farmers in this town.

The cows do not produce as much milk as need, because of poor management, it was reported at the meeting. Their basic food is insufficient. The dairy cattle don’t have enough forage to allow them to maintain production when the pastures are bare from lack of rains, reported the politicians and administrators meeting with the dairy farmers. 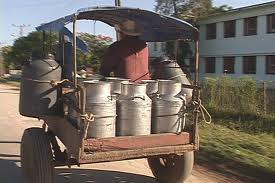 More than a logical concern for the dairy herd, the concern of the Cuban Communist Party (PCC) over the low milk production recalls simple reasons of mathematical logic. When milk production is low, the town can’t supply the quote established for children up to age seven and sick people, and powdered milk has to be substituted for fresh. Producing a ton of milk powder uses twelve thousand liters of fresh milk which, at a little more than two pesos a liter, is a payment to the dairy farmers of some twenty-three thousand Cuban pesos.

The Las Tunas Dairy Products Company produces powdered milk, which in addition to being supplied to the ration stores, is sold in five hundred gram bags at 2.90 CUC (convertible pesos), in the State-owned hard currency stores. A kilogram of nationally produced powdered milk sold in those stores, is the equivalent of 5.80 CUC, and a ton at 5,800 CUC, is 145,000 in Cuban pesos. 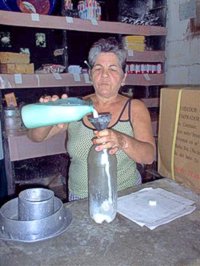 Despite milk powder costing more than six times what the State pays the dairy farmer for the raw material, anyone who wants to drink a glass of milk without asking for trouble should go to the State-owned hard currency stores.

The dairy farmer is forced to sell his milk to the State. Commerce in milk, cheese or any other dairy product is prohibited between individuals and punishable by law. The same is true for coffee. And beef? Don’t even talk about it: His Majesty, the State monopoly market, is owner and lord.

For many people, inside and outside of cuba, it’s as if good old “Daddy Socialist State” was paying for everything: public health, education, milk for children and sick people, etc.  When, in reality, we are the ones who pay.

At the National Farmers Meeting, held this last September, the vice-president of the Council of Ministers, Marino Murillo Jorge, said, “… we are fewer than 11 million people, of whom 5 million work, and of these, approximately 960,000 work in agriculture, of which about 300,000 are not directly linked to production.”

Can anyone tell me who pays for the automobiles, the gasoline, the offices and the salaries of these gentlemen who produce nothing?