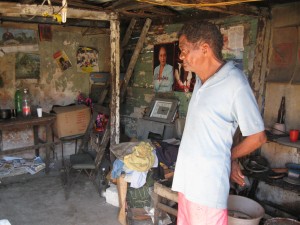 At dawn last Monday, across 23rd street, between 10 and 12, Vedado, a lady very thin, poorly dressed, half blind and with a cane, begged me to lead her to the next block, that is to the corner of 12 and 21, where she had coffee every morning because she has no kitchen in the room she shares with her son, who goes back and forth from the asylum to the neighborhood. While accompanying her I asked her some things; on leaving her in the cafe I gave her ten pesos to have breakfast; I assumed for lunch she would eat in one of those destitute meal programs for indigents.

It is not pleasant to encounter people who walk out displaying their misery without any intention to do so. They carry it in their faces, dirty and disheveled clothes, shoes, hairstyle and even the soul. With few exceptions, they seem like unburied zombies, ghosts in the sun on the streets of our cities. No one more than they reveals the crisis and lack of opportunities in the country. 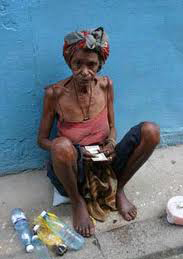 Poverty is greater than we suppose. Just look at the gray presence of people walking aimlessly. In that legion of beings alienated by famine, victims of the disparity between wages and prices of commodities, not only beggars belong, but also madmen without state support, the drunks who wander between home to the bar and the old people whose monthly check lasts a week.

Every day, the estimate of number of poor grows. There are the very poor, the totally, partial and circumstantial homeless. All interacting in an association, an association without legal representatives, whose presence belies the official slogans and raises questions about the statistics, so supportive on paper and so limited in their application.

While the beggars, alcoholics, the insane and the elderly who wander through the day and vanish at night, make up the most representative list, the squadron of extreme poverty is compounded by old ladies in the neighborhood, those who count their pesetas and curse the young clerk who alters their balance. The old ladies are followed by unemployed daughters-in-law and daughters, almost all housewives with husbands “can bring home the bacon” and force them to sell anything or to exchange their favors with the grocer, the butcher or the seller at an agricultural kiosk. 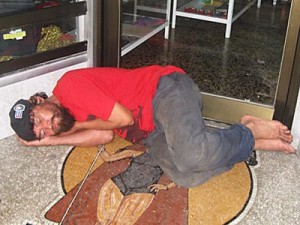 Add to the non-exclusive club of paupers the thousands of people who accustom themselves to surviving through devalued work and a symbolic checkbook; beggars of all kinds, thieves of trifles, those who shelter in bus and train terminals, visitors of stinking bars, cheap whorehouses, prohibited gambling houses, the tenements of aggressive people and thieves of storehouses and cafes, who take the risk for a little sugar or rice, a piece of bologna or a box of cigars.

It is true that despite everyday stresses, the pariahs of Cuba still enjoy “perks” in pharmacies, clinics and funeral homes; burials are still free but the mourners pay for the flowers, coffee and cars accompanying the deceased on his last walk; but the panorama of people who survive in the precariousness of Havana and other cities of the island is growing.