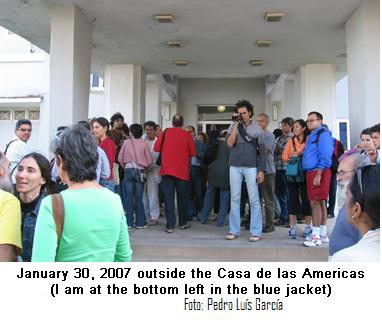 What pushed me to this adventure of writing a Blog was the bad taste left at the end of the controversy of the intellectuals in January 2007. On an afternoon like today, the 30th of January, we waited – a group of young people – to be able to enter the conference: “The gray five years, reviewing the term.”  The meeting in the House of the Americas would try to channel and institutionalize a debate that had been raising the temperature of Cuban emails for a couple of weeks already.  A select list of guests began entering the “Che Guevara Room,” while our “group of impertinents” watched, from outside, as midnight arrived.

We were there, obviously protestors, blocked by the custodians and the bureaucrats from entering, to debate and discuss our encounters with censorship and dogmatism.  We put a rhyme to a cadence as an appeal to the main organizer of the event: “Desiderio, Desiderio, hear my opinions,”  but that didn’t work either.  Inside, the voice of the Minister of Culture repeated the idea that in a place under siege, dissent is treason.  Meanwhile, on the same corner of G and the Malecon, the frustration of those who were not heard disintegrated into exhaustion and a mass return home.

A year later, I don’t know what we have left of those “Words of the Intellectuals” exchanged by email.  What is left to us from that package of complaints and demands that started as criticism of the political culture of the revolution and grew to a questioning of EVERYTHING?  I sense that the debate was hijacked by the institutions, jailed by an academic world full of concepts and fancy words, and condemned to take the course of the imminent conference of the UNEAC [Cuban Writers and Artists Union].

However, we were left – at least those of us who were outside – with the conviction that we can’t wait to be allowed inside the next debate. To me, personally, it added a definite push to start this exorcism called “Generation Y.”  It gave me the spatula for the long contained vomit (sorry for the nasty metaphor) that has fallen resoundingly over this Blog.