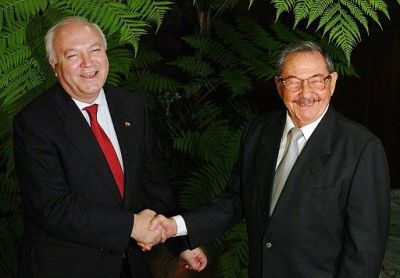 There is a lot of speculation these days about the possible release of the political prisoners. The official press, as always — half asleep between growth statistics and old speeches taken from the files — neither confirms nor denies these rumors. A careful reading of the daily paper, Granma, tells us that Spain’s Foreign Minister has arrived on the island to condemn the American blockade, talk about climate change, and to try to get the European Union to abandon its Common Position* against Cuba. If we let ourselves believe what the announcers, with their throaty voices and striped ties, say, nothing is happening here… Or almost nothing. But we all know that in the dark recesses of diplomacy, in the high political terrain woven on the backs of the people, things are moving.

Whispers come and go. In them, the word “liberation” has been stuck to a term with nefarious connotations: “deportation.” “They will go directly from the prisons to the planes,” a gentleman who keeps his ear glued to the radio told me, based on what he hears on the prohibited broadcasts from the North. Forced expatriation, expulsion, exile, has been standard practice to get rid of dissenters. “If you don’t like it, leave,” they tell you from the time you’re small; “Get up and go,” they spit at you if you insist on complaining; “Why’d you come back?” is the greeting if you dare to return and continue to point out what you don’t like. The ability to rid themselves of the inconvenient, the skill to push off the island platform anyone who opposes them, this is a talent in which our leaders are quite adept.

Moratinos would have to have a very large plane to fit all those who obstruct the island’s authoritarians. Not even a jumbo jet could transport all those potentially at risk of going to prison for their ideas or their civil actions. A veritable airline with weekly flights would be necessary to remove all those who don’t agree with the administration of Raul Castro. But, as it turns out, many of us do not want to go. Because the decision to live here or there is something as personal as choosing a partner, or naming a child; it is not permissible that so many Cubans find themselves caught between the walls of prison and the sword of exile. It is immoral to force emigration on those who might be released in the coming days.

One question, simple and logical, jumps out at us with regards to this issue: Wouldn’t it be better if the ones they carried on this plane were “them”?

P.S. A link to the Archbishop’s statement is here.

Translator’s note:
European Union Common Position on Cuba: Adopted in 1996, it makes cooperation with the communist regime conditional on improvements in human rights and political freedom. The text can be read at this link.