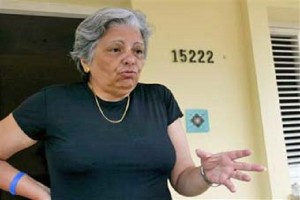 Pro-democracy activist Martha Beatriz Roque Cabello went to the Provincial Court of Havana today in order to have the state of siege she is subjected to daily lifted, but got no response from the authorities and was placed under arrest for three hours.

State Security took charge of the former prisoner of the so-called Group of 75 (those arrested in 2003 Black Spring), taking her to the Zanja Street police station in Central Havana. There, Roque Cabello was guarded by three policewomen who stripped her of her personal belongings, including her cellphone.

After three hours Major Mario from the political police appeared, and indicated what measures the repressive bodies would continue to take with her.

In the words of Major Mario, neighbors of the activist will continue to beat her physically and harass her in a general way. In addition, she will not be allowed to have visitors, nor may she leave her home, they told her.

In a phone conversation with Cubanet, Roque Cabello stressed the lack of competence of the courts in Cuba, given, she said, that they are subordinate to the political police.

At the time of this writing, the building where Roque Cabello lives was surrounded by the police and her collaborators from the Cuban Community Communicators Network, an independent group led by former prisoner of conscience, were not allowed to visit her.