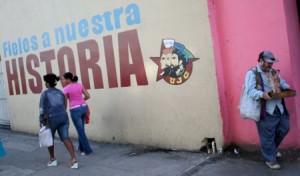 On this island where even the news circulates of contraband, we have been witnessing a kind of spiritual mass that has brought back to the public sphere the political specter of the ex-president, Mr. F. It is no coincidence that so many public appearances have taken place following the start of the release of the political prisoners of the Black Spring who are still in the regime’s prisons, and while Guillermo Fariñas was making news in the most prominent of the international media. We know that the arrogant vanity of F. could not bear to be so overwhelmingly displaced and, given that he hasn’t forgotten any of his old tricks, he decided to exploit the sensationalism of his image as a nomadic ghost and the eternal “Head of State” who puts aside his useless little brother to take the reins of power in his own “efficient” hands. But I suspect that there is something more that we don’t know behind these renewed histrionics; something sordid, twisted and definitely dark, so we will have to follow the signals in the same way naturalists detect the creatures of the forest by following their excreta. Particularly now that the classic incoherent babbling of his newspaper column, <em>Reflections</em>, has been turned into a free verse version of The Watchtower announcing to us Armageddon, specific dates included. Elderly patients have a tendency to project themselves.

But do not be alarmed, dear readers, this post is not a psychoanalysis of F., to whom my conscience already read the last rights, long ago. It is now only about some legal worries that go around and around in my head and confuse me… Being that I insist on being a citizen in a country where the Constitution is only damp paper, pissed on by those who created it.

So, then, I ask myself: if Mr. F. is no longer the president of Cuba, if he doesn’t occupy any office in the Council of State and only retains that of the First Secretary of the Cuban Communist Party (in clear violation of the statutes of that organization, since it has not been ratified because the Congress at which it would need to be “voted on” is eight years behind schedule); I repeat, if he is not legally and officially anyone or anything in this country, by virtue of what authority does he have the right to order specialists to undertake economic research, specialists who, at least in theory, have their own projects to complete as part of their jobs at the institution that supports and pays them? What Latin American country has asked F. for an economic salvation plan, to be developed in just ten days, when it has been precisely this gentleman who has been the successful architect of the economic ruin of Cuba in the last 50 years? How is it possible that he might provide guidance to Cuban diplomatic officials abroad in the management of a war that has erupted only within his own imagination? Where is the Cuban president, who hasn’t said or done a thing, while the founding caudillo of this disaster wanders around trying unsuccessfully to sow terror in the minds of the nation’s people? (Here people are much more frightened of real hunger than of imaginary nuclear conflagrations.)

In short, if we were to be civilized and respect our own laws, following the discourse they’ve been stuffing us with, they should take legal action against this impostor who usurps the powers of our legitimate President, democratically ratified in that responsibility by the National Assembly of People’s Power in 2008. We must prosecute this saboteur who goes along creating instability in the institutions, alterations in the labor discipline of our workers (the National Aquarium does not work at night), and fostering a climate of panic among the people by announcing the end of the world for this coming August 8, just when working people should be enjoying a well deserved rest.