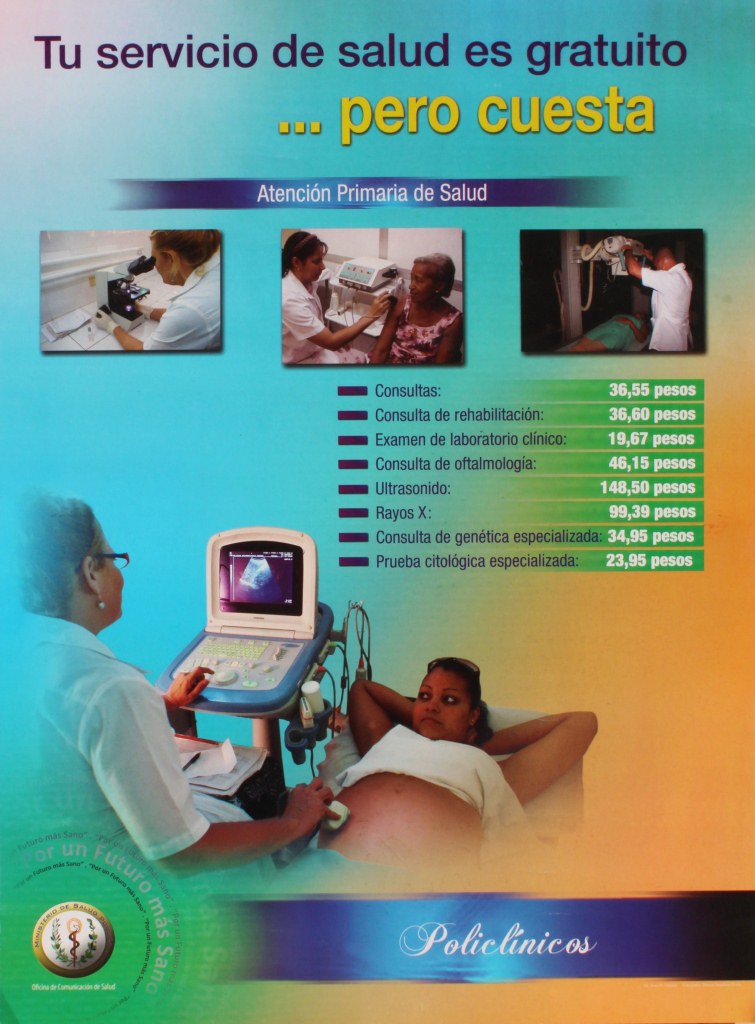 “Your health service is free… but it costs”

You’ve been able to see them for almost two years in every health care unit of the Cuban Public Health System, from any primary care office or clinic, passing through each second level hospital, even in tertiary care centers in each Institute.  They welcome us from the door of the consultation room or from the trade union wall and assure us that our omnipotent government has always been zealous to guarantee absolutely fee medical care for our people.

Seen that way, without more, it would seem a simple matter.  In this world, where to the shame of the species, dozens of thousands of children still die of curable illnesses because they do not have access to a few tablets and a measly intravenous infusion, it would be the most natural thing for Cubans to prostrate ourselves in gratitude before such an excess of philanthropy.  But if there is one thing we learned long ago it is that here, when you look into the background of the matter, we have all been charged.

It is true that the hospital does not charge us directly at the hospital or at our children’s school, but without doubt the cash register at the “hard currency collection store” (TRD*) charges us, and in a currency arbitrarily overvalued 25 times in relation to the other currency in which we are paid an unreal salary of little use to us.

These words are not trying to be an inquisitorial onslaught against the health care system to which I belong, whose essential function is impeded by limitations that no sector in Cuba can escape.

Any gratuitous attack would leave on this page the odor of the knife in the back, an aroma that this Cuban detests, but 40 years of hammering did not end up convincing me that guaranteeing a right, or trying to, grants in any way authority to my government to deprive us of other rights as essential as that.

And it is here — more than at the door of the TRD and the hotels, or in the immoral taxes of the General Customs Office, or in the extortionate cost of each consular administration abroad, among other hundreds of shameful examples — where we millions of Cubans have been charged the true currency exchange: it has been through the humiliation of the famous diplo-tiendas*, or in the door of the prohibited hotels, or through the despotism of the migratory authorities or the mistreatment by any other kind of official or through the systematic deprivation of our civil and political rights.

And invariably in the background posters like the one illustrating this post justifying as life-saving the entitlements that crush us at every step.

On the other hand these public governance schemes are not unique to Cuba nor to socialism, as has historically been insinuated to us.  There are dozens of examples of countries — and not necessarily from the first world — that sustain health and education systems as public and free as ours, and all without demanding in exchange such high doses of individual freedom.

Very true it is that sustaining the presumed public health costs each state on a world level very dearly, and Cuba was not exactly going to be the exception, but also I remember here that each Cuban worker has about 30% deducted from his monthly salary precisely to cover these public expenses.

I also remember that when our state undertakes to guarantee public health and education services — the two prime examples — it does not fulfill only a duty but its more conspicuous obligation, perhaps its only authentic obligation.

In particular, I ask myself by what magic method the Cuban government invested $4386.00 pesos in me alone, for the approximately 120 consultations that I did in my last 24-hour medical shift, in which I used only — if we except the $24 pesos that they paid me for night hours — my stethoscope, my blood pressure monitor, and some disposable depressors.

But as I am not an economist, I better leave the accounts to others and dedicate myself, as a good cobbler, to my shoes.  After all, it is true that it costs us . . . and quite expensively, for sure.

*Translator’s note: The government itself named the stores that sell only in hard currency, “Hard Currency Collection Stores”–TRD is the Spanish acronym–making explicit that their major purpose is to capture for the government coffers (through extreme overpricing) a major share of the remittances Cubans receive from their families abroad. Many items are often, or only, available in these stores (or in the black market).  An early incarnation of these stores were known as “diplotiendas,” that is “diplomat stores” catering to foreigners residing in Cuba.

See:  It costs.  By Regina Coyula.