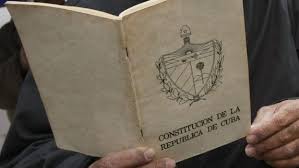 Cubalex, Lic. Julio Alfredo Ferrer Tamayo, 13 November 2019  — Unfortunately, in the Cuban legal context, there is no Constitutional Tribunal, or, to put it another way, there are no constitutional guarantees. Along with many lawyers, non-lawyers, and legislators as well, I was hoping for a change. Along with other colleagues, I had confidence in the national constitutional tradition, and especially in the milestone represented by the Constitution of 1940, recognised as the most advanced in Latin America, for its time;  nevertheless, it didn´t work out like that. Everybody, whether they voted yes or no, continues with no constitutional guarantees.

In order to be implemented, the new text, in force since April 10th, 2019, needs legislation, which hasn’t yet been prepared, and requires various time periods in which to do it. This gap has given rise to what many have called the “legislative gap”, or “legal limbo”, which is simply a period of legal system paralysis, while waiting for the legislation to be passed. At the moment, the Constitution remains an undelivered message.

To sum up, we Cubans have to wait six months for the new Electoral Law regulating election of representatives to the National Assembly, its President, Vice President, and Secretary; as well as the Council of State, and the President and Vice President of the Republic. And this is going to be delayed even further by other processes. For example, the regulations for the National Assembly will be delayed a year, and two years for the Council of Ministers, the provincial and municipal governments, and their administrative councillors.

The enactment of the law on Popular Tribunals is eighteen months away, as are also the modifications to the Laws on Penal, Civil, Administrative, Employment and Economic Procedures, and also the legislative modifications needed to effect Art. 99 of the new constitution.

As far as the Family Code is concerned, which is the window which still holds out the prospect of a marriage of equals, there are still 24 months before the start of the popular consultation process and the relevant referendum.

“The most completed and advanced of the Cuban constitutional texts”, which is what Homer Acosta Alvarez, the Secretary of the Council of State, has termed the new Constitution, will be applied bit by bit, because it needs, according to Homer himself, no fewer than 50 items of legislation. And, really, it is difficult to be optimistic about it.

The legislation which backed up the 1976 Constitution was not a happy memory. We can recall the Law on Migration (it dealt with the right to leave the country with an exit permit, a carte blanche, authorised by the Ministry of the Interior), or the Law on Association, and its Regulations (it conditioned the right of association upon prior permission of the Ministry of Justice).

We can think of other equally disastrous legislation, such as Order 149 (which violated the right oto personal property enshrined in Art. 21 of the said Constitution. And also Decree 217 of 1997 (imposed innumerable legal requirements on Cuban citizens of other provinces wanting to reside permanently in Havana).

What we can learn from such legislation is that they are a double-edged sword, holding back and restricting rights proclaimed in the text of the constitution, preventing citizens from exercising them.

Will it be the same this time around? I think so. We Cubans need to be very watchful over this legislation, because they will have been enacted without prior popular consultation, and therefore people will not be able to influence the contents, in spite of the democratic process they have been boasting about.

We remember that Art. 26 of the old Constitution recognised the right of every individual who suffers loss or is prejudiced by inappropriate action by officials or agents. Later, this right was restricted by Section 2 of Art. 96 of the Civil Code, which subordinated its exercise and implementation to declarations of illegality on the part of the superior state authorities. That is to say, if the superior state authority thinks it is not in the state’s interests, there will be no compensation, or indemnification, or any constitutional rights worth a bean.

This right, with identical wording, is anticipated in Art. 98 of the new Law of Laws. It remains to be seen if the regulations which are to enact this constitutional precept, let’s call it Civil Code, will set up a legal mandate of subordinate status, constraining the right to compensation and indemnification for damages improperly caused by state authorities.

If the new Constitution had conceived of a Tribunal of Constitutional Guarantees or other similar entity with the authority and structure necessary to protect the constitution, then those persons who had seen their rights infringed would have had an organisation to go to in order to defend the constitutional position. That organ would be a defensive wall against arbitrary action.