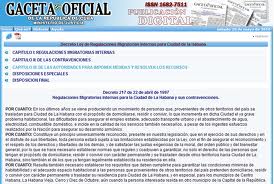 The housing regulations, recently enacted by the government of Cuba, and which take effect on November 10, leave intact regulations that impede the full exercise of the right of ownership.

As part of the implementation of the Guidelines adopted at the Sixth Congress of the Communist Party of Cuba in April, the State Council issued Decree-Law 288 amending the “General Housing Law”.

The new law allows homeowners – Cubans and foreigners permanently residing in the country – to freely dispose of their homes, through exchanges, gifts, and sales.

The directive of the State Council eliminated the requirement that owners who decide to exchange or donate their property to first obtain authorization from the Municipal Housing Department. But it left intact the relocation rules for the capital and areas under special administrative management, which impede the full exercise of property rights.

In the Cuban legal system, Decree 217 is still in effect, which establishes the “Immigration Regulations for the City of Havana,” limiting both freedom of movement within the island and the right to choose one’s place of residence in it.

This decree requires people who have acquired (by inheritance, bequest, gift, or purchase) a home located in the capital, to apply on behalf of their family for a permit of residence and movement, to the presidents of the municipal governments.

The state institutions require citizens who are not domiciled in the capital, in order to accomplish any change of address in the capital, to obtain an opinion issued by the Municipal Housing Directorate, attesting compliance with the provisions of this rule. The same steps must be taken by those who lease or trade their property.

On the island there are also areas designated as special, or of high significance for tourism, subject to special administrative oversight by government mandate, in which a residence permit is required.

In 1995 The Executive Committee of the Council of Ministers declared as “an area of ​​great importance for tourism” the municipality of Old Havana in the capital, and in 1997 Varadero, in Matanzas. Residents, or those seeking to settle in these areas, need permission to exchange, lease or acquire ownership of a home, before applying to the Notary Public.

The freedom to manage personal assets represents a step forward for the rights of Cubans, but they will never be complete while the government continues to ignore others of equal value and importance, such as freedom of movement within the national territory, and the right to choose one’s place of residence.