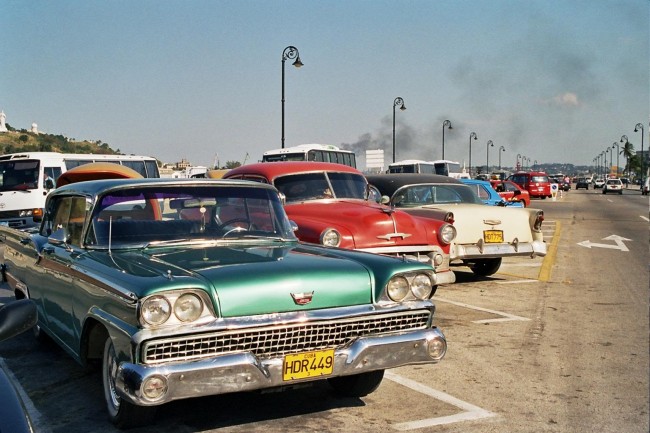 In this spring of 2011, we wait expectantly for the announcement of new measures to allow Cubans to buy and sell cars and houses.

It’s likely that during the sessions of the Sixth Congress of the Communist Party of Cuba in April, they will abolish the absurd prohibitions in force that forbid Cuban citizens from buying or selling a home or car.

On the black market, buying and selling cars and houses is one of the most lucrative businesses, which has produced unreal profits. An old Ford car, late 40’s in good condition, can cost up to $30,000, twice the cost of an apartment with three bedrooms and 90 square meters.

Evelyn, 54, who sells houses in Havana illegally, is one of those who think that when this type of buying and selling is legalized, prices could fall.

“A good house could be quoted between $80,000 and $100,000. Maybe more. It will depend on the interest shown by foreigners involved with prostitutes and those Cubans living abroad who wish to acquire housing for their relatives on the island. The signs in the underground market indicate that a significant number of people would throw themselves into buying homes because of the housing shortage in the country,” predicts Evelio.

If housing prices soar, car prices could hit bottom. “It’s not possible that a relic of the twentieth century from General Motors is sold today for $40,000. Or that a mediocre car, like a Russian Lada, costs more than $20,000. It’s crazy. If the state begins to sell cars that are modern and economical, even at outrageous prices and for large profits, the speculative bubble in car sales would decline sharply,” said Joseph, 43, who for two decades has been involved in buying and selling old US-made cars.

In the meetings that are taking place these days in neighborhoods and workplaces, to analyze and discuss the guidelines for the future economic and social policies that Raúl Castro’s government will apply at the Sixth Congress, the most discussed points are the disappearance of the ration card and the authorization to buy and sell homes and cars.

Another topic discussed a lot is the abolition of the country’s entry and exit permits for Cubans, which confers on the regime unlimited power, to be used as a reward or punishment, when authorizing foreign travel. According to reliable sources, this topic will not be discussed in the short term.

What’s really hoped for, I repeat, is the repeal of laws that prohibit buying and selling of houses and cars. At the starting gate, after the gun goes off, there will be foreigners or people who travel frequently living in Cuba.

Heinz, a Swiss man who often visits the island to chase skirts, is considering buying one or two floors when the government gives permission. “In my country an apartment costs about 200,000 francs. Here, I think that one in good condition wouldn’t go over $60,000 dollars. Anyway, in Cuba the laws are very complicated, especially if they allow foreigners to purchase property from the natives. If it’s not authorized, it wouldn’t be worth it to buy a house in the name of another person. There are many dishonest people in Cuba,” he says smiling.

It’s also likely that the business of buying and selling homes won’t suddenly blossom. Some 62% of residences in Cuba are in fair or poor condition. Moreover, there aren’t enough houses. Quite the contrary.

It’s common to have three different generations living under one roof. Young couples have no privacy. And many resort to countless inventions, such as building a loft (half-way to the ceiling) or improvising room dividers.

Either way, there are great expectations about possible state permission to buy and sell houses and cars. In a country fenced-in by so many prohibitive measures, repeals are always very welcome. Although few benefit from them.