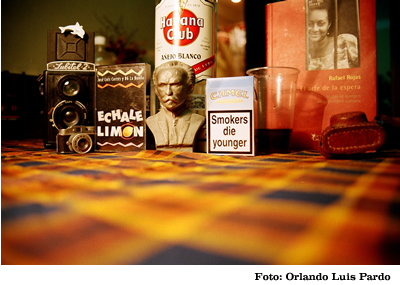 The smoke gets in my hair, my clothes, and overnight I take on the smell of tobacco although I am one of those Cuban adults who has never smoked. The man at the next table has consumed a pack and a half of Hollywoods in the short time he’s been here, using an empty beer bottle as an ashtray. On the wall there is a sign showing a cigarette with a red line through it; the white background of the poster is stained with nicotine. There is no remedy, I’m a passive smoker even though my country adopted a decree in 2005 that should protect my lungs in.

I passed unscathed through that first “drag” — shared while sitting in a circle — that kids try to prove how grown up they are. Thirty-two percent of my compatriots, however, ended up hooked from this youthful prank, and today spend a good part of their personal resources on Criollos, Populares, or H. Upmanns. This is one of the highest smoking rates in the region, perhaps comparable to the high levels of alcoholism, although the latter is not officially declared. Though half the homes on the Island are exposed to smoke, in our house we have an ex-smoker, a teenager who doesn’t seem interested yet, and this humble servant who used to dunk the packets in water to discourage her father from the vice.

The resolution to protect those who don’t smoke is strict and very modern, but in practice it only worked for a couple of weeks. I don’t know anyone who has been fined for violating the rule against smoking in public places or on public transport, and you can still see people selling different brands of cigarettes close to elementary and secondary schools. Notwithstanding my abstinence, a couple months ago I was diagnosed with emphysema and the doctor gave me a wink while saying, “You smoke, right?” I feel like buying myself a dozen of the strongest cigars, taking long drags, and blowing the smoke on the damp paper of a law that is not complied with, or on those who have ensured that these regulations aren’t worth the paper they’re written on. But I don’t know, I suspect that if I did I would received one of the few fines imposed in the last five years.