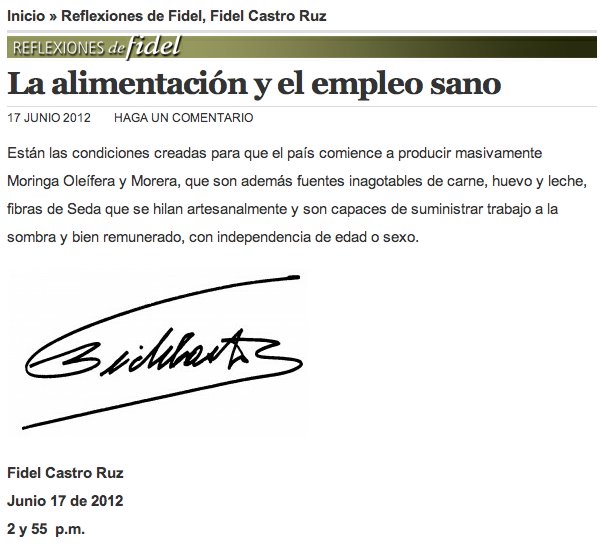 Fidel Castro’s latest “Reflections” columns, published in the Cuban press, have left many readers inside and outside the Island in a mild state of shock. Without exceeding a hundred words, the ex-president’s most recent texts seem to be infected with the brief style of the Twitter social network. An undoubtedly great contrast, if we compare this conciseness with the extensive writings that have been published since he began his convalescence, after surgery in July 2006.

The man who was characterized by his habit of speaking for hours from the podium in the Plaza of the Revolution and in front of television cameras in the studio, now appears to be opting for minimalism. But that is not the only change operating in the commentaries coming out under his signature, his attention has also shifted from global to domestic affairs.

For six years the most recurring themes in the “Reflections of Comrade Fidel” had been the world crisis of capitalism, environmental problems, reproaches directed to the government of the United States, and the portent of a nuclear explosion. He has especially emphasized criticisms of Barack Obama’s administration and the presence of American soldiers in Afghanistan and Iraq.

However, since the beginning of June his allusions to our own national events have occupied his brief lines, always appearing on the front page of the newspaper Granma. A timely obituary on the death of the boxer Teofilo Stevenson; his proposal to appoint former runner Alberto Juantorena as president of the Cuban Olympic Committee; these are some of the issues addressed lately.

Not only do we have the unaccustomed terseness in the former head of state, but some have even interpreted his writings as actual riddles and metaphors. Hunting for certainties, Cubans search among his phrases, looking in each letter for a key that will help them unravel what happens at the highest echelons of power. Lacking transparency of information, a simple syllable could constitute a clue.

Such was the case with the note where the Comandante en Jefe expressed his profound solidarity with Erich Honecker, whom he called “the most revolutionary German” he’d ever known. Many readers quickly established a parallel between Honecker who “bitterly paid the debt contracted by someone who sold his soul to the devil for a few sips of vodka,” and Fidel Castro whose political ascendancy is shrinking with advancing age and the reforms drive by Raúl Castro.

It is, however, one of the latest reflections in this minimalist series that has provoked the most comments. In it he addressed the possibility of “massive” plantings in Cuba of “Moringa Oleífera and Mulberry,” two types of trees. The first of these plants, native to India, has great nutritional value and, according to the U.N. Food and Agriculture Organization, contains a high percentage of proteins and vitamins. Meanwhile mulberry leaves are the natural food of silkworms.

According to Fidel Castro, both trees are “inexhaustible sources of meat, eggs and milk” and their production could “provide work and shade, regardless of age or sex.” His words have generated a certain unease among the inhabitants of a country where agriculture has suffered successive defeats after previous bets on intensive plantings of some miracle product.

So Monday morning, at the newsstand in a central Havana neighborhood, an old man looked with surprise at the box with 57 words, counting the title “Reflections.” When asked why he was so surprised, the distressed gentleman could only come up with “he must be ill to have written so little.” A lady was looking at the inside pages of the newspaper for the rest of the text, unable to accept that the box on the front page contained its entirety. After confirming that was the case, she mused in a whisper, “surely he’s taking a break and will soon return with his more long-winded texts.”

The truth is that in parallel to the distress caused in some by Fidel Castro’s change in style, popular jokesters have had a field day with the already famous “moringa and mulberry.” Cubans laugh as they express their fears that voluntarism will return and the Comandante en Jefe’s plans will replace the pragmatism that — bit by bit — has been spreading through Cuban agriculture.