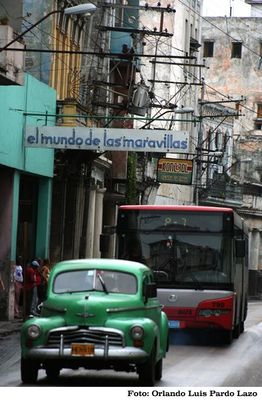 The term “revolutionary” has a different meaning in the Cuba of today than we would find in any Spanish language dictionary. To deserve such an epithet it is enough to exhibit more conformity than criticism, to choose obedience over rebellion, to support the old before the new. To be considered a man of the cause, requires one to manage a convenient silence and to watch arbitrariness and excesses March by without pointing them out to the highest levels of responsibility. A word that once gave rise to thoughts of ruptures and transformations, has evolved into a mere synonym for “reactionary.” Paradoxically, those who believe in safeguarding the essence of the “revolution” are precisely those who show a greater political immobility and who promote — with more animosity — the punishment of the reformers.

Esteban Morales, who until recently enjoyed the privilege of appearing live in front of the TV microphones, learned of such semantic mutations by dint of suffering them. A Communist Party member, academic, and specialist on issues relating to the United States, he had the dangerous idea of writing an article against corruption. His questions dealt primarily not with the daily diversion of resources — as we call stealing from the State — which is how many Cuban families manage to make it to the end of the month, but rather the ethical decay that has established itself higher up, in the estates of power, where embezzlement and misappropriation reach lavish levels. He had the unfortunate experience of putting into writing that, “there are people in government and state jobs who are positioning themselves financially for when the Revolution falls.” It is a conclusion anyone can draw just by looking at the fat necks of the managers, the shiny Geely cars belonging to the officers of CIMEX corporation, or the high railings surrounding the houses of the commercial hierarchy, but Morales committed the audacity of pointing it out from within the system itself.

Imbued with the calls for constructive criticism, calling things by their name, speaking openly, Esteban Morales thought his article would be read as the healthy concern of one who wants to save the process. He forgot that others with similar intentions had already been labeled as divisive, manipulated from the outside, addicted to the honey of power, and ideologically deviant. For less than this, journalists had lost their jobs, students their places at the university, and economists, lawyers and even agronomists had been stigmatized. Once punished with an indefinite suspension from the core of the PCC, the previously trusted professor has started down a road that we know well where it starts, but not where it ends. Experience says that the route of sanctions is never traversed in the reverse direction. Those ousted eventually realize that those they used to consider the “enemy,” could at some point prove to be people imbued with the original meaning of the word “revolution.”