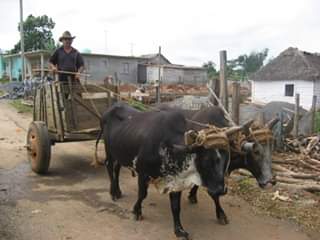 Fernando Dámaso, 4 June 2020 — After the 1959 “accident” occurred, Cuban agricultural production, which had been prosperous and efficient, ensuring the population with an adequate food supply, began to plummet.

Two agrarian reform laws — the second one took away what the first had provided — were carbon copies of the failed Soviet system of cooperative farms, agricultural conglomerates and machinery depots.

Large estates were broken up, creating one large state-owned estate spanning the entire country, and private property was eliminated. These and other absurd measures were the coup de grace from which Cuban agriculture never recovered.

Multiple initiatives — different types cooperative farms, agricultural conglomerates and production units, all controlled by government authorities with no autonomy — led to failure after failure. Today, almost 90% of everything consumed on the island must be imported. in 1958 only 28% was imported and 72% was produced domestically. The numbers speak for themselves.

According to the Ministry of Agriculture, there are four million hectares (58% of the country’s land mass) of farmland, though only 23.2% of it is considered very productive or productive. 76.8% is deemed to be underproductive or very unproductive. Three million hectares require treatment due to problems such as invasive marabou weed. In recent years 2,225,000 hectares were set aside for private farming though 350,000 of these have yet to be handed over to farmers. All of them are on land with unproductive to very unproductive soils, many covered with marabou and rocks, forcing their tenants to do a lot of arduous work before they can be farmed.

Of the 887,049 people working in agriculture, 23% are women. Only 7.4% of farmland is irrigated. Due to shortages, there is only enough fuel, pesticide, fertilizer and seeds in 2020 for 28% of crops (tobacco, rice, potatoes, tomatoes for processing). Though the state owns most of the country’s arable land — 77% is publicly owned, 23% is privately owned — it produces only 10% to 12% of the nation’s food. 88% to 90% is produced by privately owned farms or by the 242,000 farmers who lease land from the state. But there’s more to the story. No farmer, whether a private landowner or a member of an agricultural production entity, is really independent. Ultimately, the state is always in control.

Given all this, let us assume that farmers form the basis of Cuban agriculture. They could be the landowners before the “experiment” (a few), landowners after the experiment (a handful) and the tenant farmers of recent times. What they all have in common is that they depend on and are controlled by state-run “production bases” operating under the Ministry of Agriculture in conjunction with a some type of cooperative or other organizaiton. Without this connection farmers can neither plant nor sell their crops.

These entities decide what will be planted and what price the state will pay to farmers. In high-priority crops such as rice, corn, beans, soybeans and sugar, farmers receive (buy) “technological packages,” which include seeds, fertilizers, pesticides and fuel. The packages do not always arrive before the scheduled start of planting or in the necessary quantities, forcing farmers to choose between trying to find these supplies on their own or loosing their crops.

When the inefficiency and bureaucracy that characterize these state-run systems causes them to fail, opportunities for corruption arise. Officials from the Ministry of Agriculture, the National Association of Small Farmers, production bases and cooperatives — mainly the top executives appointed by the ministry itself — prioritize and allocate resources to those whom they favor or who will pay them off.

The harvested crops are supposed to be delivered to Acopio — a conglomerate of thirteen state-run food procurement and distribution companies — whose transport and storage facilities, known as collection centers, are located throughout the country. Though Acopio is technically in charge of distribution, in practice this is handled by agents from the production bases, who deliver it to collection centers.

In addition to delays in paying farmers for their crops, which are common throughout the agricultural sector, adequate packaging and transportation for crops are often not provided. The state also often refuses to purchase quantities of certain products, claiming there is no market for them.

In general, the prices farmers receive for their crops are based on three classes of quality: first, second and third. When making purchases, Acopio almost always rates products second or third class, rarely first. However, when it sells these products, which are purchased primarily by the tourism industry, it rates them first class, reaping profits that producers never see.

The collection centers are usually where the greatest corruption occurs. These are where products are diverted to the so-called illegal market, where surcharge payments are made and false sale and transfer documents are prepared.

In 2018, 549,512 tons of sweet potatoes were produced. However, in all the retail produce markets supplied by Acopio, only 34,622 tons (6% of the entire crop) were sold. It is unclear where the remaining 514,890 tons (94% of the crop) went. Was is consumed by farmers themselves. Did it go to social service centers, hotels or public dining halls? Or did it simply go to waste?

For decades Acopio has been responsible for the loss of crops due to its failure to pick them up on time and its terrible distribution system. In spite of having such a poor track record, it remains in operation, with plans to keep it going indefinitely.

Although allowed to set aside a portion of their harvests for self-consumption, these discrepancies are an indication that farmers are not reporting all their projected production figures. They retain some of their crops for sale through intermediaries, even though the practice is illegal and they risk being penalized.

To get away with this, they must bribe a link — a go-between — in the chain of control. Intermediaries must transport the goods using their own or rented vehicles, bribing authorities at control points along the way so that the goods are allowed to pass without being confiscated.

In the past a bribe would cost five convertible pesos (CUC). Now the price is at least 20 CUC. As previously indicated, Acopio is part of this corruption scheme, providing false invoices and transit permits. Once a transfer is successfully completed, the paperwork is destroyed, both by the person to whom it was issued and by the issuer.

At the produce market, the final transfer point for the products, the situation is not much more transparent. The courier must present the legal documentation showing that the merchandise has been received. Sometimes the documents are fake since, in general, more merchandise is delivered than an invoice indicates.

The idea is to sell the extra produce to those willing to pay a higher price. These buyers are typically the produce market’s own vendors or pushcart vendors, who get there early in the morning.

A current practice is to transfer the goods in vintage 1950s cars or some other type of vehicle to previously determined locations such as garages or patios. Not surprisingly, all these products are of better quality and more expensive than those for sale at the various produce markets.

Because of the complexities and risks involved in harvesting and storing them, onions, garlic and some other products are no interest to the state. Their production is entirely in private hands and, therefore, they command high prices. Potatoes, by contrast, are entirely in the hands of the state. The production and sale of them by private producers is prohibited. These are some incomprehensible absurdities of Cuban agriculture.

This unproductive, bureaucratic and corrupt chain ultimately impacts the consumer, who is forced to suffer the consequences of shortages and high prices, even when the product is not of the best quality or presented under the most sanitary conditions.