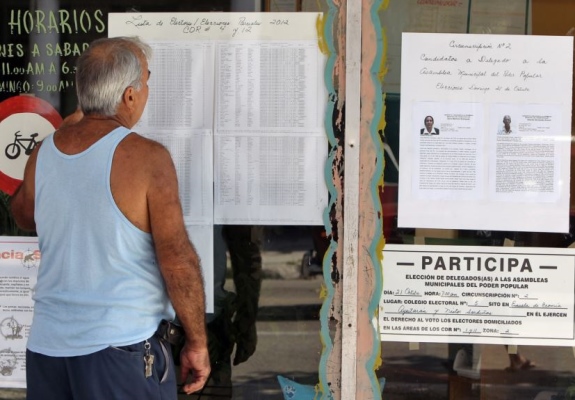 Cubanet.org, Ana Mercedes Torricella, Havana, 22 April 2015 – On Sunday, April 19, those who voted in the municipal delegates election of the Popular Power did it under compulsion, as is customary. They voted, like it or not, for business as usual and for “the same people.” In other words, “these people,” as many Cubans say in reference to the regime.

For the majority, the voting does not matter. Their most expensive and cherished interests are food and the money to acquire it.

I have some neighbors who live a misery of fear. The youngest, who was very beautiful, managed to marry an Italian, and she move to Genoa. Some years ago, when she came to visit Cuba, she bought gifts and brought them Euros. But that family did not use that money to buy furniture or to fix the dilapidated dwelling: they used it to buy stereo equipment. Currently, they alleviate their hunger with blaring music, which they listen to while they drink rum or some other cheap liquor. END_OF_DOCUMENT_TOKEN_TO_BE_REPLACED

Often they get the speakers to the front door. So the whole neighborhood feels the music. They get them out when it is one of their birthdays, for Mother’s Day, the end of the year or any other day that there is something to celebrate. And also when there is some party for the Revolution or what they call elections.

Last Sunday, from before midday, my neighbors had the speakers out and put on the music. If that can be called music. They were the first to vote. “To get out of that shit fast,” they told me. They voted for any of the candidates. It was all the same to them. Later they ended the day with reggaeton and cheap alcohol.

My neighbors speak horrors of “these people,” they say that they owe them no gratitude, but they give no sign of giving up voting and every time insist that they need them for something, the recommendation certificates that the CDR (Committees for the Defense of the Revolution) grants to “those who fulfill the work of the revolution.”

Compulsion, extortion and blackmail are the mechanisms for arranging massive membership in the CDRs, the FMC (Federation of Cuban Women), the CTC (Cuban Workers Center) and the other official organizations that the regime puts forward as “civil society.” Repression, always present, completes the picture of the necessary unanimity.

That was the scene on Sunday, April 19, in the districts open to called elections for delegates to the municipal assemblies throughout Cuba.

The candidates’ biographies had the usual typographical errors in full view with almost no one interested in reading them. Maybe with a little more discretion than on other occasions, the PC (the trusted people of the only party) indicated for whom to vote.

According to preliminary official figures, 85% of registered voters voted. Then they corrected and added a little: 87.30%. We suppose that the true percentage of abstention was higher. Now the government does not dare to speak of more the 97% participation as it used to some years ago.

A 13 to 15% abstention rate may be normal in other countries, but in Cuba it is quite significant: here the only ones who do not vote are those who are openly against the regime.

To not answer the call to vote suggests losses that not everyone is ready to assume. He who works for the master, omnipresent, omnipotent, and omniscient state may lose his job. He who is self-employed might lose his license. He who lives in the limbo of a tolerated illegality, like the lottery bet takers or the vendors of something stolen for someone, will have to confront the police.

In these terms, the best thing is to go vote early and not look for trouble. “Overall, everything is going to be the same!” is the general consensus. No one wants to look for trouble, and not going to the polls is certainly looking for big and very serious trouble.

This is a bleak truth. Especially for young people. Like Nelly. Almost no young person has plans for the future in Cuba. All aspire to go. Anywhere. By plane or raft, with passport or without. They no longer want to share the air with “these people” who don’t let them live. Much less to bring children into this corrupt environment. So, Cuba languishes, ages, dies of stagnation.

On Sunday April 19 they voted for everything to remain the same, which means not only bad, but worse.