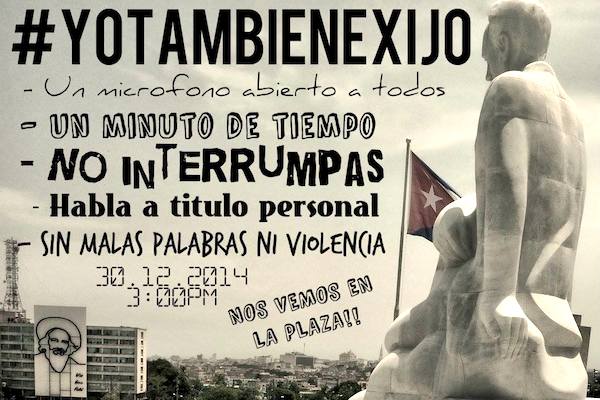 HAVANA, Cuba. – During the final days of 2014 and the first three of 2015, the bells have been ringing for artist Tania Bruguera and the wave of arrests sparked by her announcement of the performance Tatlin’s Whisper # 6, after which she intended to provide a minute of freedom of expression for the common Cuban at the Plaza “de la Revolución” itself.

Authorities responded with their usual violence, detaining several dozen dissidents, opposition activists, journalists, and other members of the independent civil society and tossing them into dungeons. Some of the detainees had not even intended to participate in the event, and were arrested only for the crime of leaving their homes on the “wrong” day.

Comments on the subject have swarmed the digital media, as befits the case of such a recognized and award-winning artist as Bruguera, with a prolific career, though she was almost totally unknown to the potential recipients of her performance.

Tania Bruguera, in short, has suffered the same fate that the other members of the opposition and of the independent civil society have faced for decades: censorship and repression by the regime, while those same “common Cubans” suffer from the proverbial ignorance –be it as a result of misinformation or disinterest. So we reaffirm the urgent need to avail all Cubans of the bulk of information that allows them the civic empowerment and the willingness to come out as actors of the changes.

The reasons for Tania Bruguera’s intention to perform are too well-known and are more than justified. The repression orchestrated by the Cuban government, however, though predictable, is counterproductive at a time when it should strive to present a more tolerant face.

The General-President has lost a golden opportunity to score before the international public opinion somewhat, showing such an outrageous stupidity that could only be understood if he had the deliberate intention to launch a challenge to Barack Obama’s conciliatory position and the democratic world as a whole.

Anyone who knows the Cuban reality knows that it would have been very easy for the dictatorship to annihilate the “Tatlin effect” and, incidentally, make a fool of the artist using its usual methods. Namely, to let her reach her stage and her microphones, and then control or prevent entrance to the “counterrevolutionaries” – probably the only Cubans who would have dared to exercise their freedom of expression publicly and to voice their opinions and demands – mobilize its more loyal militants (and also their milidummies) to fill the space and to have them take the microphone to launch the usual praises of the revolution and its leaders.

They could even have used their agents, infiltrated in the opposition ranks, to offer the “mad-dog faces” of those who want to see the end of the socialist paradise, to have faked their support for Bruguera’s play by sharing the Plaza’s venue with works of La Colmenita, or by simultaneously celebrating any other “cultural act” with the participation of the many artists who usually lend themselves for such cases. It would have been, no doubt, a massive event, and the General-President would have shown the world, at the same time as the existence of “the most genuine and spontaneous freedom of expression of the Cuban people,” the firm commitment by the people to the revolution and its unquestionable conquests.

He chose, however, brutality, a disproportionate official reaction that sends misleading signals that are inconsistent with the relaxed atmosphere that we should be starting to breathe with the burial of the war hatchets after half a century of confrontation with the natural enemy of the people. But did anyone really expect a different outcome?

There are those who wonder, following the events, if Tania Bruguera’s performance was worth it, since it turned into an occasion of unleashed repression at a time of year when family traditions are of peace and celebration. The answer to this depends on the artist’s objectives, not on the reaction by the Cuban government.

If her intention was to draw attention to international public opinion about the dictatorial nature of the government, the mere purpose was a success and was worth it. But its price, namely, the official repressive reaction, is the norm in Cuba – as is well known by independent civil society on the Island, with decades of first-hand resistance against the government – and the artist is not responsible for this.

On the other hand, exercising civic rights and free expression of all kinds are worth the effort, be it a performance or simply an everyday practice, but we must not enhance the facts or attribute to the artistic event the capability of “obstructing the normalization” of relations between Cuba and the US.  The propensity for drama is definitively one of the evils that we Cubans drag with us, which turns us into myopic politicians.

So, to pretend that “common Cubans” – not “mercenary” dissidents, or the usual disobedient individuals – could make spontaneous use of open microphones in a public place (particularly “that” public place) for citizens’ complaints and demanding of rights from the government is naive, a utopia, or a combination of both. The idea is beautiful and romantic, but far, far away from reality.

Let’s idealize it: the fact that ordinary Cubans, immersed in survival, need venues for freedom, does not mean that they are ready to openly challenge the government, especially if after the performances they will continue to be inevitably tied to this Island prison. A lot more is needed to overcome the fear of one minute on stage and before a microphone.

A quick poll is sufficient to verify that the recipients were unaware of the act. In fact, neither the artist’s proposal nor the wave of related arrests has emerged in national public opinion.

Havana residents who this last December 30th observed the unusual police presence in the areas adjacent to the Plaza never knew what it was about, and probably did not give it  much importance. We have to understand them: those were the days of the agricultural fair and, as the last straw, in many municipalities, chickens “for the people” were being distributed.

It’s not cynicism, but realism. In terms of rights, we Cubans we have a long way to go, including –by the way – overcoming the temptation to place on the desk of the US Presidential demands that the Cuban authorities will be responsible for complying with. At least, such is the opinion of this Cuban, for whom the exercise of freedom of expression has always been practice, not performance.