Leandro raised a crocodile since it was small. He brought it from the swamp and at first fed it only bunnies. The crocodile was called Bad.

As Bad was growing, it was necessary to find new types of meat so that he wouldn’t suffer from heartburn or malnutrition, and it was enough that he had never left his cage and had never seen a crocodile. He ate all kinds of meat: beef, whole chickens dead dogs…

Leandro was a bit like Bad. The coincided in that both had had a kind of parallel carnivorous evolution. Clearly, in the case of the boy it was a metaphor for his love live. It all started the day Leandro realized that women had minds of their own and not always so as he pleased. It all started the day Leandro met Yipsi. This girl had an attitude that got the boy to imagining that he could do the craziest things with her in her bed, only when Yipsi got to his bed she turned out to be a prude who refused to satisfy Leo’s sexual needs, so what happened is that she satisfied the nutritional needs of Bad.

And so a very strong link was created between master and pet. After the spectacle of Yipsi Leandro started to to really spoil his crocodile friend, and did whatever he could to bring him a new piece of meat every day. But one day the inevitable came to pass, Leo met a girl who didn’t want to share him with he beloved Bud. This girl was named Ali. END_OF_DOCUMENT_TOKEN_TO_BE_REPLACED

Ali was a total sex lover and when she met Leandro she turned into a lover of sex with Leandro. Also also proved to be a smart and funny girl, with whom Leandro started to spend most of his time. They watched movies together, walked everywhere holding hands, went out to get drunk and once they even got tattoos together. Each had their right wrist marked with the phrase “Ali and Leo” inside a red heart.

Spending every day, every hour and every minute with Ali, Leo was forgetting the one who at another time had brought him much happiness. Bad began to be hungry for long periods and waited patiently for his owner to agree to feed him.

One morning Ali had to go visit her mother because, after spending so much time with her new boyfriend, she hadn’t seen her for almost a month. Leo didn’t know what to do, didn’t know how to fill his time. He went out to the backyard looking for sometime interesting to amuse himself, but he couldn’t stop thinking about his beloved. In the backyard he saw the cage and Bud and remembered all the good times he’d spent with him, when he sat in front of him and told him his troubles, when he was a baby and played at throwing bunnies to him, or simply of a night when the sun started to set and the light illuminating the patio was reflected in Bud’s yellow eyes, Bud having spent hours completely still digesting the girl from the night before.

Leo was flooded with a deep sense of nostalgia on realizing he had left his friend to die of hunger. Bad was petrified in a corner at the bottom of the cage. Leo opened the cage door and gently touched the huge animal, but he was very cold. Leo felt a knot in his throat that wouldn’t let him breathe and with the weight of his conscience and his feelings he couldn’t do anything but take off running. In his desperation he even left the house door open.

In the afternoon when Ali returned from visiting her mother and found the front door open, she thought it was a provocation by Leo who must be very hot after spending all those hours apart. Then the girl started to get as hot as her boyfriend and took her clothes off, leaving her clothes just at the entrance and moving toward the back of the house looking for Leo to satisfy her desires.

On returning, Leo gasped when he discovered that Bad had not died of starvation and he had to take off running, but this time not to become dessert for his pet. Bad was taking the afternoon sun, but this time he was out of his cage and from his teeth hung the arm a woman with a tattoo on her wrist, in which he could read, inside a red hear, the phrase “Ali and Leo.” 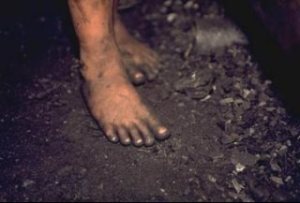 The girls knew that Mamá hadn’t thrown out the trash nor cleaned for several weeks, it seemed that their crisis intensified recently. But this wasn’t what most frightened them, rather that this cop might decide by some chance to search the basement and find them there. Poor Mamá, she would have to go to jail and they didn’t want that even though she’d left them locked up for so many years. END_OF_DOCUMENT_TOKEN_TO_BE_REPLACED