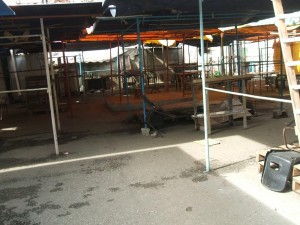 HAVANA, Cuba , January 8, 2014 . www.cubanet.org – We’re told that a picture is worth a thousand words. It need not be always true, but it is certainly in the case of Armageddon that has passed over the stands of Havana’s self-employed at the beginning of this year. Furthermore, it’s not about any particular imagine, it’s the sad representation of a new low blow dealt by the regime to ordinary Cubans, people who despite abuse and deception without let up, from birth to death, and still they raise their heads in vain every time they see the slightest reef.

There must be thousands of self-employed who started 2014 without even minimally remunerative formal employment, and without hope of recovering it, after being made to believe that at last they had it. The result of an extensive tour I made last Tuesday through Havana’s streets, looking for photographic evidence of this new regime bungle, leaves me dismayed.

Hundreds of stands and cubicles, fairs and whole blocks dedicated to proprietary trading in central streets such as Carlos Tercero, Belascoaín, Reina, Galiano, Neptune, Monte … were dismantled overnight in response to official regulations prohibiting selling imported clothes and shoes, and pieces of hardware and equipment, among other items. The spectacle recalls those war movies which show cities after they’ve been invaded and sacked by barbarian armies.

This, and not the false freeing up of car sales, is the news in Cuba today. Although the official media hasn’t published even a short note, which is the height of submission and proof of their complicity with the “permanent campaign of subversion” and “pessimism about the future,” which according to Raúl Castro, the enemy (ie, themselves) has introduced among us.

They are playing with fire. Just because it’s been it before and nothing happened, we shouldn’t stop repeating it. Knowing that those thousands of now unemployed “self-employed” will again seek financial relief in the the sewers of the black market, does not preclude recognizing the enormous frustration and anger they experienced, not less, certainly, than that felt by their clients, which is almost the entire population of Havana.

The regime should have foreseen it, since they’re strolling now among the dismantled stands of every self-employed marketplace, doing the dead fly, individuals clearly planning to stand permanent guard. Police in plain clothes? Businessmen trying to fish in troubled waters? Militant communists members of the paramilitary troops. A little of everything maybe, and all mixed up. But the truth is that the mood is tense, like high voltage wires.