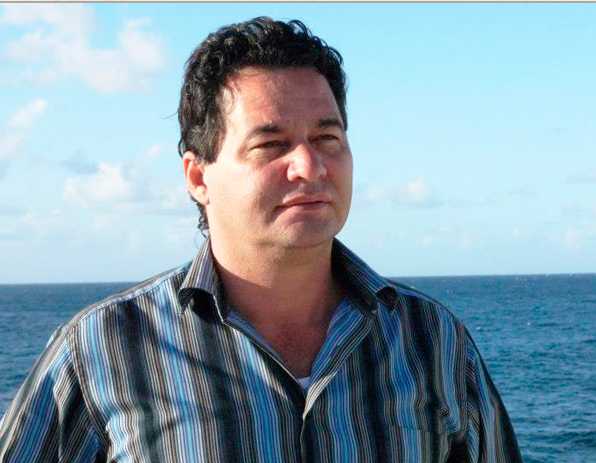 Angel Santiesteban”When I left the fold they settled the score because, in addition to their spiteful nature, the Castros needed to punish me so that other artists wouldn’t escape from the corral.”

Ángel Santiesteban-Prats (Havana, 1966) is one of the most prolific writers of his generation. Dichosos los que lloran (Happy are Those Who Mourn) (2006), Suerte que tienen algunos y otros cuentos (The Luck of Some and Other Stories )(2012), El verano en que Dios dormía (The Summer When God Slept) (2013) and El regreso de Mambrú  (Mambrú’s Return) (2016) are some of his most well-known works. The winner of several prizes inside and outside the Island, he is a member of the PEN Club of writers in Sweden.

In 1995 he won the prize for short story from the Writers and Artists Union of Cuba (UNEAC) with Sueño de un día de verano (Dream of a Summer Day), a harrowing look at the war in Angola, which was not the official version, and the book was banned until 1998. When he founded his blog, Los hijos que nadie quiso (The Children Nobody Wanted) (also the title of one of his most praised books, awarded the Alejo Carpentier prize for short story in 2001) in order to denounce the reality of his country, the response of the political police was to beat him, threaten him and fabricate a case of a common crime against him, in order to condemn him to prison.

Since then he has also become an independent journalist and dissident, one of the most hated and persecuted by State Security, for disarming and openly denouncing the farces and violations of the Cuban Regime, while most intellectuals remain silent.

Santiesteban-Prats gave an exclusive interview to Martí Noticias about Decree Law No. 349/2018, which implements a long list of new political crimes in the cultural sphere, increasing the dictatorship’s censure and control of artists on the Island. He also spoke about other subjects.

Why are these new censorship measures, outlined in Decree 349, coming precisely at this moment?

Santiesteban-Prats: They are trying to sustain a regime that is fading. They know it but don’t want to admit it; they think they can continue deceiving the international community. The Cuban people took off their blindfolds a long time ago but are still afraid. They fear reprisals to the point that they might even be killed, above all those opponents who aren’t visible on social networks, meaning that no one will raise the cry for them. After suffering and enduring unfair trials in the courts, which answer to State Security, they rot in prison. Cuban families can barely bring food to their tables, and it’s very difficult to feed a prisoner. In general, the families reject any rebel who comes up against the Regime, because they know the high cost they all will have to pay later, apart from being marked as suspect by Castro royalty. The Castros and their hit-men use terror to stay in power. It’s that simple.

Some opponents have sacrificed themselves, and the best have managed to show the rest of the people that the sacrifice is valid, that it is possible to confront Power even when it slaps them in the face. Thanks to those who have endured punishment and have duplicated their opposition in response, many have decided to join the struggle. Every time, people speak more openly, say what they think, which before was unthinkable. Things have changed, and who knows it better than Alejandro Castro, the power behind the scenes, and he needs to keep hold of the reins and try to control his puppet, Díaz-Canel. They are sacrificing him like a pig, without minimum consideration. He will be there as long as he fulfills his orders; when he no longer complies, he will have a fatal illness, committ suicide or simply be charged with corruption or treason, and he will leave the scene.

How important is it for the Regime to control cultural expression, which has so much to do with the freedom of expression?

Santiesteban-Prats: In general, dictatorships fear journalism and art. From experience, they know that artists and journalists drive public opinion, and it’s the last thing they need now when it’s so easy for anyone to give an opinion or put the news on social networks. So they try to gag the independent voices. It’s a gesture of desperation in order to delay the tsunami that will come without fail.

When I left the fold they settled the score because, in addition to their spiteful nature, the Castros needed to punish me so that other artists wouldn’t escape from the corral. Since then, the intellectuals have learned the lesson, and after me, no one who is established in Cuban culture, like I was, has opposed them with the force and decision that I did.

They always need to close off any opening so the truth won’t come out. Thus they now are implementing new measures and more censorship, counting on their Stalinist way of doing things; maybe they think it’s the only way to stay in power a little longer. They are betting on that. The Castros don’t want to loosen their grip on the family estate. They are convinced that it belongs to them and they will hang onto even by their fingernails.

What is the concrete objective of these regulations that affect freedom through economics?

Santiesteban-Prats: To slow down the freedom that we will have in our lives sooner rather than later. While they test out who can continue Fidel and Raúl Castro’s work, which isn’t anything other than an outrage for the Cuban people, continuing to make them live in total misery. They don’t want any Cuban, whom they consider their slaves, to empower themselves, be independent, live without the “charity” of their dictatorship. It’s like that anecdote of the featherless chicken in the snow that always ran between Stalin’s boots in order to get warm.

How do you think most creative people will respond to this?

Santiesteban-Prats: With silence. Most who are established are busy begging to be allowed to travel in order to survive. They will not sacrifice what they’ve won when they are convinced that it won’t solve anything and that they would be crushed like cockroaches. And those who still haven’t managed to establish themselves push, lower their heads and pretend that nothing matters to them, the only important thing is their work, art, while they wait for their scrap to fall from the sky. They believe that if they move away from power, they will freeze, like the chicken, and they prefer to be sheltered between the boots of the master. They believe that by publishing their books, singing their songs, or having their work shown in theaters, they already have enough. Although they know that things could be worse, and thinking of me in jail is enough for them to do nothing.

Let’s continue speaking out so we can deal with our fears together, until they take us out or lose power. We can’t count on the artists in the National Writers and Artists Union of Cuba (UNEAC). They have something more important to do: protect themselves. Don’t forget that, in spite of everything, the artistic sector gets the most benefits, so they feel lucky about surviving the calamities when they look around and see the rest of the people.

What artistic expressions are the most affected by the new censorship regulations?

Santiesteban-Prats: Everything in general, but mainly those who deal in words. I think they’re the most fearful because they permeate more in the population, at least in the professional sector, through scripts for movies, television, theater and literature. Don’t forget that many of these creative people write for alternative, independent media, far from the Castro umbrella.

How is Díaz-Canel seen in Cuban artistic circles?

Santiesteban-Prats: For what he is, an innocuous man. There are no “revolutionaries” left in the cultural sector, maybe some fidelistas: but at this point in the game they feel deceived, even by that man who hauled them out of poverty in order to ultimately steal the lives of several generations. Every Cuban knows that Díaz-Canel doesn’t represent anything. He doesn’t occupy any particular post in the cupola. He’s a carnival toy that you can throw balls at to try to knock off his hat. Every time that happens and it falls off, the owner – meaning the Castros – put it back in the same place or substitute another toy. Thus, successively, while the international community allows it or the desperate people throw themselves into the streets and are massacred like in Venezuela or Nicaragua.

What does Díaz-Canel have to do with these new regulations that intensify the censorship?

Santiesteban-Prats: He also is busy praising the Regime while fulfilling the Castros’ orders. He assumes his role of overseer of the slaves and plays it without protest. But as far as making decisions, it’s clear they don’t come from him. He only has to show his face, pretend that he’s the “President” and Raúl and his children, Alejandro and Mariela, will take care of the rest.

The Regime sold Raúl Castro as a supposed reformer. Then it designated Díaz-Canel to succeed him. What do these successions mean for the System and what do they mean for the people?

Santiesteban-Prats: Pure makeup, a cosmetic display. Fooling international public opinion, like they’ve done with the European Union. They pretend to make decisions that will gradually lead to democracy, but it’s nothing but great theater. The Castros are professionals in the art of transformation. They change every time they feel pressure, the possibility of losing power. They’re professionals of illusion. They spent decades making a large part of the population believe in accomplishments that they couldn’t feel. Intangible projects where millions of Cubans got involved so that the final result would be catastrophic. One project after another, and on like that for six decades. These successions mean nothering for the people because nothing will be resolved for them, while for the System they mean another breath, gaining time while they wait for better times to arrive, sips of oxygen that will permit them to remain in that imprecise space, but definitively, staying in power is the only thing that interests them. Now that family doesn’t know how to live without it, and they aren’t ready to cede power peacefully.

What should independent artists do in this new context?

Santiesteban-Prats: Not abandon the struggle. Don’t give up even if it’s all we can do. Don’t leave Cuba. Staying inside the archipelago now is a challenge to the Regime. I’m one of those who has exercised freedom of creation, and now that I’ve done it, I don’t know how to live without that divine grace. As long as artists don’t taste freedom, don’t remove their fear of writing, they will never know the satisfaction of being an artist with full integrity.

Journalist, writer, director of radio, film and television. After living in Venezuela and Colombia, he went into exile in the United States. His weekly column appears in Latin America media (El Nacional), Spain (Disidentia) and the United States (El Nuevo Herald, Infobae, HispanoPost), among others. Previously he wrote for Diario las Américas. Among his prize-winning documentaries are Habaneceres, La gracia de volver and Coro de ciudad. He has produced entertainment, opinion and debate programs for Florida television. His texts have been published in books and journals. He founded the publishing house Colección Fugas, dedicated to the writing of the diáspora. He is a member of the Interamerican Institute for Democracy, for which he has made documentaries, feature reports and interviews about freedom, democracy and their institutional framework in the Américas. His web page is luisleonelleon.com. Follow him on Twitter: @LLLeon_enMarti.