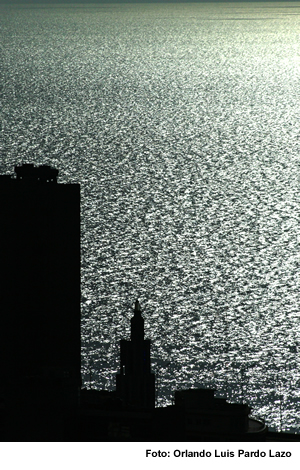 From the wall of the Malecón there is not much to look at. A blue dish that gets annoyed now and again and launches its foamy waves over its bordering avenue. There are no sailboats, just a couple of patched vessels authorized by the captain of the port. In summer, teenagers throw themselves into the warm waters, but in winter they fearfully shy away from the salt spray and cold wind. A boat plies the route from east to west each night; a shadow on the horizon preventing potential rafters from escaping across the Straits of Florida.

Just now we are in the months of the year when the coastal avenue comes to its greatest turbulence. But everything happens between the reef and the street; this vitality doesn’t even dream of extending to the wide and salty expanse on the other side. When did we start to live with our backs to the sea? At what moment did this part of the country, which is also ours, cease to belong to us? Eating fish, sailing on a yacht, looking back at the buildings from the cadence of a wave, enjoying the contrast of blues along the beginning of the first ridge. Chimeric actions in a coastal city, sharp delusions on an Island that appears to float in nothingness and not in the Caribbean.

I have the illusion that one day, in order to rent even a rowboat, it won’t be necessary to show a foreign passport. The sails will return to take over this bay, reminding us that we live in a maritime Havana, born between the cries of the corsairs and the clamor of the port. The red snapper will displace the catfish and carp on our plates and from the wall of the Malecón — our legs dangling over the limestone reef — we will greet a flotilla of boats coming and going from El Morro.