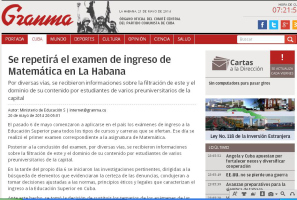 University Entrance Exam in Mathematics to be Repeated in Havana

It happened several years ago and it’s now one of those open secrets that even the kids know about: the bribery of teachers and professors at all levels of teaching has ended up being, as a result of habituation, something almost folkloric; and although it would be unfair to tar the innocent and the guilty with the same brush, it was certainly worth while having fired off warning shots about a matter which has reached scandalous proportions, all the more so for having had the public spotlight shone on it, in view of the terrible moral consequences, with implications for all of us.

We are not always talking about bribery in the form of straightforward cash. There is a whole range of resources available to the brown-nosers and ostentatious people to achieve their objective and once the target teacher has been singled out all you have to do is study his needs and specific tastes in order to fire the shot, which could be delicious snacks, made to measure clothes, expensive perfumes or exclusive invitations, for example.

Without doubt, the lamentable economic hardship suffered by our country´s educators influences all this, with a “salary” similar to that earned up to now by our doctors, and which has kept both groups on the edge of poverty for decades. But, it isn’t for nothing that I write here the word “influences” rather than “determines”.

As a result of mysteries of human nature, at the same time and place as some tend toward hypocrisy, others behave stoically. I know honourable examples of teachers who never were shamelessly two-faced and who have lived with decency while enduring poverty, and for that reason I cannot accept that necessity is enough in itself to affect everyone equally, however oppressive it may be.

It’s clear that in this case as well, the people detained and prosecuted — eight of them according to what was published by Granma — belong yet again to the lower classes. Although transparency is always reasonable, because it is the “raison d´etre” of all genuine journalism, and it is worthwhile making an example, I ask myself if this official melodrama would be equally able to denounce a sacred cow, a commander or historical leader of the Revolution, in the event of it being shown that they were implicated in some such difficulty.