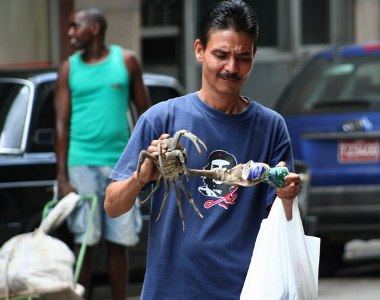 For a few moments, while looking in astonishment at my television screen, I assumed that some paramedics would show up and, straitjacket in hand, definitively remove the decrepit orator from the scene, as happened years ago with Habib Bourguiba in faraway Tunisia. It was Saturday, August 7, and I could not believe that Mr. F, in a public speech broadcast live and addressed to the full Cuban Parliament, unleashed the greatest avalanche of nonsense that has ever been spewed, with complete self-confidence and without a single one of those present daring even to cough. After half a century of an absurd and vivid unreality, I haven’t lost the ability to be amazed. I confess that, much to my regret, I felt badly, a kind of guilt by association simply from watching the magnified ridicule of others. I also imagined the discomfort of the most clearheaded of those spectators (deputies, they say) pretending to take seriously the embarrassing errors flowing from an already too deteriorated brain. But many of them were shameless enough to applaud, ask questions and even flatter the orator. It was the biggest farce I have ever seen. However, despite the exaggerated shows of submissive support (or perhaps because of them), never did F seem to me so lonely and helpless.

Only in the opening minutes did the loquacious octogenarian manage to refer to “the Soviets” (who “are working” to avoid the nuclear conflagration that is coming) and the “Soviet Union” (which currently has serious problems with forest fires), with a present conviction as if twenty long years had not passed since the total collapse of that socialist monstrosity known as the USSR. The blunders of the old man followed one after another with complete impunity. Thus, F included new scientific evidence such as “Evolution began about 4,000 years ago…” or “18,000 years ago there was only fire on Earth…” and even some otherwise sage advice, “We already know that the sun will go out one day…” My anxiety grew as time passed and I started to bite my fingernails, but no paramedics appeared with a rescuing straitjacket. This time, definitely, it was not only F who was the victim of his proverbial arrogance… it was obvious that some elements of the higher-ups had a particular interest in publicly exposing this speaker’s remains.

I couldn’t stand the pain and turned off my TV, convinced that this country is sick. Since then I’ve been overwhelmed by a strange feeling encompassing shame, helplessness and anger. For the first time I excuse (partly) F for what is happening now; he is nothing more than an old man who suffers from the mental incapacity to critically distinguish reality from his own delusions. Perhaps he no longer has the lucidity to pay for his numerous crimes. But that huge hall was packed with other culprits; there was the president of this country and the president of the parliament, there were the more than 300 deputies and guests of the occasion, a whole herd of rip-off artists who continue to thrive in the shadow of the benefits they receive for their symbolic jobs and for their merits as active participants in the collapse of Cuba, while society is increasingly submerged in the worst of its permanent crises. They are also responsible for what happens in the future.

What interests are in motion through this lamentable theater and what perverse strategy is capable of supporting a farce like that orchestrated on Saturday the 7th, even at the risk of provoking greater instability than that in which we already live? Only THEY know, but I suspect that today we have more reasons for alarm than for laughter. If the factions vying for power in Cuba are divided between a deceitful and slow reformer and a deranged druid with messianic manias, we’re in real trouble. In the meantime, this Island has neither helmsman nor leader. How much would I have given that Saturday morning so that we Cubans, who do not have a real parliament, would at least have had some paramedics as timely and efficient as those in Tunisia!